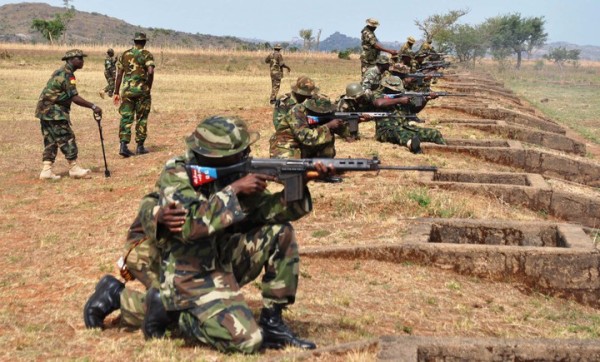 The Chief of Army Staff, Lt.-Gen. Tukur Buratai, has stated that by December 2015, Boko Haram would be completely wiped out of the country even as soldiers have ambushed the insurgents who were crossing from the Sambisa Forest into Iza.

The army boss gave this assurance in a statement issued by the acting Director of Army Public Relations, Colonel Sani Usman, in Abuja today, saying that Buratai made the promise during a routine operational visit to frontline troops in parts of the Northeast.

“I want to reassure Nigerians that Nigerian Army is ever determined to succeed in meeting up with the set deadline of defeating Boko Haram terrorists by the end of this year,” it said.

The statement said that the Army chief had forfeited the public holidays to embark on operational and morale boosting trips to troops under Nigerian 3 Division and 7 Division areas of responsibility.

It said that Buratai’s first port of call was Headquarters, 33 Artillery Brigade, Shadawanka Barracks, Bauchi, where he addressed troops on the on-going operations.

Buratai was accompanied on the visit by some Principal Staff Officers at the Army Headquarters and the General Officer Commanding 3 Division, Maj.-Gen. H.A. Umaru and other Commanders.

The report reaching us indicated that at the end of the encounter with soldiers in the Sambisa Forest,, two of the terrorists were killed while others abandoned their supplies and fled.

One general purpose machine gun and one AK47 rifle were captured. Other items abandoned by the terrorists were three bicycles, provisions including maggi, potash, peanut and onions. [myad]