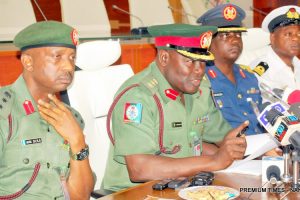 The Army, in a statement, insisted that the PDP must also render an apology to the gallant officers and  men who are daily paying supreme sacrifice  to ensure peaceful atmosphere in Kaduna State, and that the party should issue retraction of this unfounded allegation  on or before Saturday 26 May 2018, “otherwise, an appropriate legal action will be taken against them.”
In the statement, which was issued today, Saturday, by the Deputy Director of the Army Public Relations, Colonel Muhammad Dole, the Army observed with dismay that stalwarts of either political party faction or an opposition party are resorting to desperate blackmail and outright falsehood with intent to drag the military into party politics.

“Previously it was false allegation of demolition of a party Secretariat and now direct involvement of the GOC. This allegation is totally baseless and irresponsibly conceived with ill motive of tarnishing the image and personality of the GOC.
“The fact of the matter is that, on Friday 11 May 2018, General Mohammed was dutifully engaged in Kano, where he attended the burial rites of the late Sheikh Isyaka Rabiu and turbaning ceremony of Lieutenant General Abdulrahman Danbazau (rtd) (Minister of Interior) as BARADEN KANO. On Saturday 12 May 2018, General Mohammed accompanied the Chief of Army Staff (COAS) Liuetenant General TY Buratai to  pay condolence visit to the families of late Sheikh Isyaka Rabiu in Kano and thereafter visited Depot NA in Zaria before returnimg to Kaduna in the evening after the conduct of the local Councils elections.
“The military personnel are conscious of their roles in the conduct of any election exercise and strictly abide by the Nigerian Army Code of Conduct on elections exercise. Likewise, military hierarchy always emphasizes apolitical stance of its troops in all the occasions.
“The perpetrators of this falsehood are expected to back up their allegations with pictorial views or visual evidence of the scenes of the event to prove the involvement of the GOC or troops of the 1 Division NA in any part of Kaduna State.
“The general public is requested to disregard the publication in its entirety and regard the perpetrators as mischief makers and enemies of progress who are bent on pitching the military against the peace loving people of Kaduna State.”