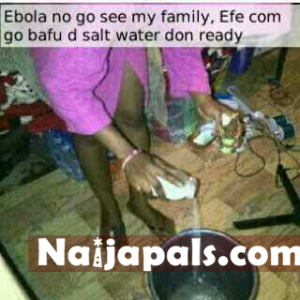 Most Nigerians today, bowed to phone calls or text messages that asked them to bath warm water mixed with table salt as a way of preventing the deadly Ebola virus infection.

The message which emanated from the ruler of the Igala Kingdom, the Attah of Igala in Kogi state, prescribed salt solution as a magical vaccine against the virus. This led to Nigerians scrambling for salt-water bath for protection from the deadly Ebola virus.

Local radio and TV stations in Kogi state had quoted the monarch, Attah Idakwo Michael Ameh Oboni, late yesterday night, as making the prescriptions from his palace in Idah, the traditional capital of Igalaland. Oboni offered the purported prescription after the Nigerian government declared that the pandemic had become a national emergency.

The prescription, originally intended for people of the Igala Kingdom, quickly went viral on social media and text messaging platforms. Relatives also exchanged telephone calls advising one another to bath with salt-water solution.

The salt solution bath remedy was reinforced after claims that a Catholic priest, Ejike Mbaka, also asked his followers to perform some religious rituals which included drinking salt water.

Salt and water are the major ingredients of the Holy Water used for a wide range of physical and spiritual purpose by Catholics.

Nigerians who phones their loved ones also asked them to chew bitter kola before they leave their houses for offices or business places.

The Igala king’s “magical prescription” was received with great enthusiasm by residents panicked by the spread of the virus around the West African sub-region.

According to local report, the monarch prescribed that a pinch of salt be added to about 15 litres of water and used for a soapless bath.

One bath with the salt solution is all that is required, residents who admitted performing the ‘immunization’ ritual said.

“We have nothing to lose with a salt water bath,” Attanasius Ameh, a resident of Idah in Kogi state said, justifying the ritual.

He argued that faced with a no-vaccine-no-cure situation, a simple salt solution bath as a potential vaccine was a chance shot at survival many were willing to take.

“I have done it,” Juliet Gimba, a resident of Lokoja said, adding: “I put a pinch of salt in a bucket full of water and had my bath without soap. I bathed all my children with it too. There is no cure for Ebola. This is the best I can do to protect my family.”

There is no medical proof that salt water solution could prevent the transmission of Ebola.

The king did not also explain how he came about the prescription.

An epidemiologist with the Kwara State ministry of health, Dr Michael Oguntoye, cautioned against the use of such concoctions for either the prevention or the treatment of the Ebola Virus Disease.

Oguntoye advised Nigerians to beware of GSM text messages asking them to bath and drink salt solution as a preventive medicine against the dreaded virus.

The expert on Public Health said that he had received such messages and calls from people asking for the authenticity of the claim.

He said the claim had not been medically proven that bathing with salt and drinking salt solution could cure or protect one from the Ebola virus.

“Ebola disease is contracted through close contact with blood, saliva, sweat, semen or secretions from organs of infected individuals and animals. People are only advised to disinfect their surroundings with one cup of Jik in nine cups of water solution in all their surrounding daily.”

According to the epidemiologist, there is no evidence to show that drinking salt can kill the virus.

Oguntoye also warned people against using Jik solution to bath, adding that the solution is only to disinfect the surroundings against the virus.

The expert reiterated that the virus is deadly with high mortality rate and no known cure.

And Nigerian government has also issued a statement warning that bathing with salted baths is not a cure for the deadly Ebola Virus. [myad]