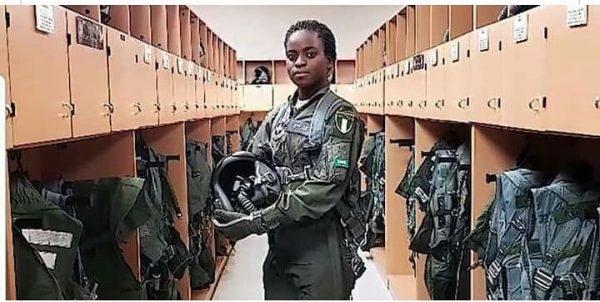 Speaking to newsmen, Flying officer Kafayat Sanni, who graduated from the NAF training school in Kaduna in 2017 as best among the rest and was among the 63 international students from 23 countries, said that she would play her part in the ongoing counter insurgency operations in the North East.

The female pilot fighter went through pilot training at Columbus AFB in the United States where she also distinguished herself. Flight Officer Kafayat Sanni completed pilot training in US in July 25.

In the US, Kafayat had been flying the T-6 Texan II and wants to fly fighter aircraft when she returns to Nigeria. She is one of five women pilots in Nigeria, and the only fighter pilot among them.

She recalled: “Nigeria only has a few selected students who come to the U.S. each year. I was extremely excited when I heard that I was chosen. This is a very rare opportunity that I did not want to miss.”