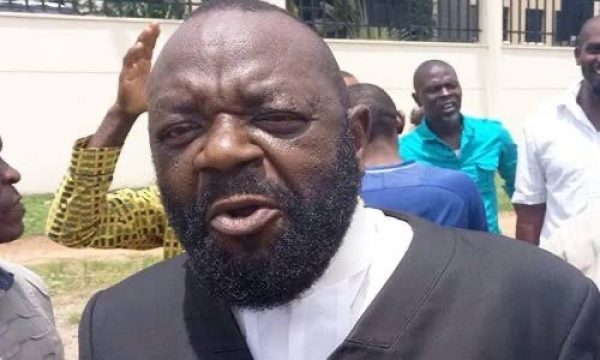 Counsel to leader of the proscribed Indigenous People of Biafra (IPOB) Nnamdi Kanu, Alloy Ejimako, has given conditions for his client to appear in the court for his treason trial.

He insisted that until a hearing is conducted on why the military allegedly invaded his client’s home in 2017, Kanu should not be expected to appear in court for trial.

Kanu did not appear when his treason trial commenced but the Court said he would be tried in absentia.

His lawyer, who was represented in court by another lawyer, claimed that the court notice was very short.

Kanu’s lawyer told newsmen after the brief hearing said that Nnamdi Kanu was absent because he needed to be assured of his security.

“Our position is the court should have conducted a hearing as to why Nnamdi Kanu has repeatedly failed to appear in court.

“If that enquiry is conducted, it will bring to the fore what happened in September 2017.

“And it will give an opportunity to introduce evidence in the proceedings to demonstrate why nobody under such circumstances should be expected to appear in court because the army went in there to kill him. I don’t know what the court expected him to do–to stay here and be killed and be brought to court, or what?

“If someone is on bail, such a person is under the protection of the court. And now, an agency of the same government that is prosecuting this man sent its armed forces to this man, to kill this man. And 28 men were killed.

“The court is not making an enquiry into that, and they are solely concerned about proceeding with his trial in absentia. It shouldn’t happen in a well-ordered system. We just have to get to the root: why did he not appear in court? That is the question.

“If it is settled, it will be determined on whether he jumped bail of which no conclusion like that will ever be reached. If the court makes such inquiry, it will also give the court an opportunity to determine what happened in 2017.

See also:  Before Criticizing Me, Compare situation Before I Came In And Now, Buhari Tells Critics

“Then they can tell Mr Kanu to come and face your trial in court because the court will give you protection. When that is done, he will come. I guarantee he will come.

“Once the court makes a pronouncement on why he is not there, and makes a ruling, then he will appear. But this court is not doing that. If they proceed with absentia trial, the international community will see it as kangaroo.”

On the fate of Senator Enyinnaya Abaribe, one of Kanu’s sureties, Barr Ejimako said: “I am representing the Jewish Rabbi, Immanuel Shalom, the co-surety for Nnamdi Kanu. Abaribe was not the only surety.

“The other one is Mr Tochukwu Uchendu, an accountant. They are of the equal footing with N100m each, totalling N300m. That is what they stand to lose if Nnamdi Kanu is determined to have jumped bail. Abaribe’s case is the same as my client’s case.

“We have the case in court that the bail bond cannot be revoked without conducting a hearing on why the person that was given the bail did not appear in court.

“The sureties cannot be said to have breached their bonds in circumstances such as Nnamdi Kanu’s situation where 28 persons were killed in his house.

“They bonded a man alive, and they want him produced in court dead? It can’t happen. The bond subsists, and no one is going to lose any money, and nobody is going to jail for a bail bond that was not breached, but by the Nigerian Army.”