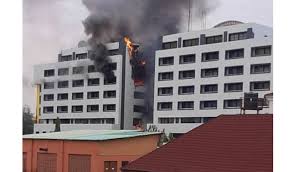 Nigeria’s Minister of State for Budget and National Planning, Prince Clem Agba, has said that no data or record was lost in the fire incident that occurred at the office of the Accountant-General of the Federation.

He said that the fire was caused by a spark from one of the air conditioners on the fourth floor of the building at about 10:00am and was successfully put out by firefighters.

Agba, who spoke to news men today, April 8, shortly after the incidence said: “We have gone round the rooms and offices where the fire affected, and I am glad to report that our data centre where all our records are kept are fully intact.

“There is no destruction, so we haven’t lost any record.”

He said that the only damage to the data centre was the exterior, which houses the cooling units.

Agba said that one of the immediate steps taken was to shut down the data centre since the cooling units were no longer working optimally, adding that a full-scale investigation would be instituted to ascertain the cause of the incident.