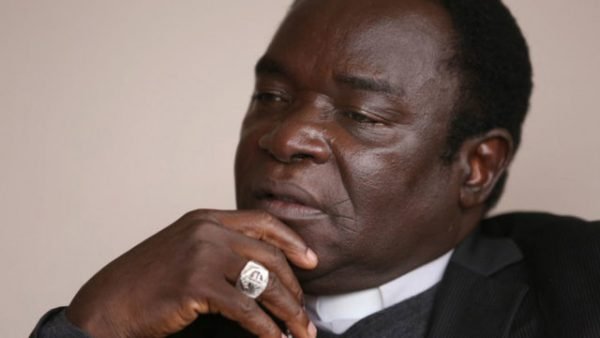 The Northern Christians Forum of Nigeria (NCFN) has disowned the c Catholic Bishop of Sokoto Diocese, Matthew Hassan Kukah describing President Muhammadu Buhari as practicing nepotism and that he is institutionalising Northern hegemony.

The group, in a statement signed by its President, Rev. Dr. Josiah Nabut, in Barnawa, Kaduna State, warned Kukah to avoid using the pulpit for political gains.

According to the Northern Christians, the cleric is derailing and shifting from the purpose of serving the laity and has now become a tool in the hands of politicians.

The NCFN noted that most of Bishop Kukah‘s claims against Buhari are rehash from certain political oracles he usually visits.

The group, however, urged Kukah to desist from lending himself to be used by politicians because his gift is to serve all of humanity, not himself.

We have decided to intervene to call those who have taken this path of dishonour to desist as it is not in the overall good of the laity and to open the eyes of those who see nothing wrong with this and may want to emulate it.

Bishop Mathew Hassan Kukah is a well-educated cleric and highly respected by us who share the same faith with him.

Apart from his deep knowledge of the Bible, he is the man blessed with the power to dissect socio-political happenings around the world and analyse the same for better understanding.

But that has not blinded our eyes to know when he is derailing and shifting from the purpose of serving the laity to serving himself.

A pulpit is a sacred place and anyone gifted by God to mount it should it see as a privilege and use it to serve God and to better humanity; not for selfish or political gains.

This is the difference between Samson in the Bible and other men of God like John The Baptist.

As far as Samson was concerned, the anointing of sheer physical strength that God gave him was for him to flex his muscles, play around and pursue lustful pleasures.

He did not use it for the purpose he was given the power and ended in a most pitiable circumstance.

But John The Baptist for instance knew the purpose of his calling and used it to serve God.

He forsook earthly pleasures, lived in the wilderness and was committed to his divine call until he was rewarded with the honour of Baptising Jesus.

This has seen him hobbling around politicians for most of the time rather than dwell on the spiritual lane of meditation in quietness, spiritual intercession through self-denial and long supplication via the known path of sacrifice.

He rather cherishes being seen at the State House more than attending to the less privileged.

And the Bishop most times fail to live up to the standard he sets for others.

When Kukah was appointed to serve as the Secretary of the Oputa Panel, he betrayed his bias and contradicted his preachments for equity and fairness, when he accepted the position without looking at the composition of the commission which had Justice Chukwudifu Oputa as chairman.

Equity demanded that as Justice Oputa was a Christian, that the next powerful position in the committee which is that of the secretary should have gone to a Muslim. And Bishop would have been the first to scream if both the Chairman and Secretary of such a sensitive commission have been Muslims.