Home NEWS We Did Not Pay Ransom To Boko Haram For Release Of Chibok... 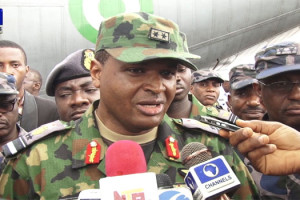 The Defence Headquarters of the Nigerian Army has made it clear that Nigeria government did not pay any form of ransom, much less financial ransom to Boko Haram insurgents for the release of 21 Chibok schoolgirls recently.

Reacting to report by a Nigerian newspaper, alleging that ransom was paid by the government in exchange for the recently released of 21 of the abducted Chibok girls, the Nigerian Army said “this is unsubstantiated story, to say the least, is quite unfortunate.”

In a statement today, the Army recalled that it had issued several statements to clarify the issue surrounding the release of the girls, which the whole world applauded.

“It is, therefore worrisome that some sections of the media continue to undermine this modest effort of the government, security agencies and other stakeholders. It is imperative to state categorically that the sponsors of this media campaign have a hidden agenda which is best known to them.

“The defence headquarters and other security agencies will not be distracted and would remain focus in achieving its objectives in the North East. The important thing is that the release have been made and circumstances surrounding this effort should not be a matter of controversy so as not to overheat the polity and jeopardizing the ongoing efforts to secure the release of the remaining girls and other innocent citizens still in captivity of the terrorists.

“The insinuations that ransom was paid to the terrorists which the terrorists used to escalate the recent attacks in the North East is completely false and imagination of the author. The general public should, therefore, discountenance it in its entirety.

“The DHQ wishes to once more remind the media to be cautious of such reports which have serious implication on national and to further add that, as partners in progress, the media also has a stake in the ongoing efforts to restore lasting peace in the North East and the country in general.” [myad]