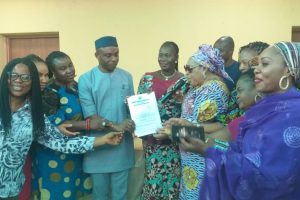 The National Association of Women Journalists, (NAWOJ) has bought nomination form for the re-election, for a second term, of the incumbent chairman of the Nigerian Union of Journalists (NUJ), Federal Capital Territory (FCT) Council, Comrade Emmanuel Ogbeche.
A statement by Ogbeche’s campaign leader, Mr. Timothy M. Choji, said that the form was bought today, November 2, at a brief ceremony at the secretariat of the NUJ FCT Council, Utako Abuja.
Speaking at the event, President of the NAWOJ, Ladi Bala, said that the women journalists decided to purchase the form on behalf of Ogbeche in appreciation of the remarkable achievements recorded by Ogbeche in leading the FCT NUJ in the last three years.
She called on practicing journalists in Abuja to re-elect Ogbeche to enable him consolidate on his achievements.
Responding, Comrade Ogbeche, who was visibly emotional for the good gesture, pledged to do more for the welfare of Journalists in Abuja.
Among those who graced the occasion were former Presidents of NAWOJ, Evelyn Onyilo and Asabe Baba Nahaya, who both commended Ogbeche’s sterling achievements and plegded support for his re-election.
Other members of the Fresh Start Team who also picked their forms for election included Patrick Osadebamwhen, (Vice Chairman) and Ochiaka Ugwu (Secretary), among others.
About 80 members of the NUJ were present at the historical event.