Home NEWS Oba Of Benin To Rivers Gov, Others: We Don’t Want Godfathers For... 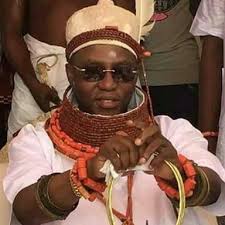 The Oba of Benin, capital of Edo State, Omo N’Oba N’Edo Uku Akpolokpolo, Oba Square II, has made it clear to Governor Nyeson Wike of Rivers State and leadership of the Peoples Democratic Party (PDP), that people in the state would not tolerate any form of godfatherism around the re-elected Governor, Godwin Obaseki.

The Omo N’Oba who spoke today, September 29 when Governor Wike, led three other PDP governors on a thank-you visit to him for his efforts at ensuring a peaceful election in Edo State on September 19, reiterated his disdain for the concept of godfatherism.

“I want to on this occasion plead with the PDP that you also as you have always been talking about the concept of godfatherism, you will uphold it and don’t let unscrupulous members of your party try to now come out and start to use your party by proxy or remote control to control our governor and end up being the hidden godfathers, we don’t want hidden godfathers.”

The Oba of Benin expressed gratitude to the God and the ancestors for hearing the prayers for a peace election.

“If you will recall when I invited the distinguished political actors of all the political parties particularly the two most active political actors, I also said why were they being called gladiators as if they were in the coliseum in Rome. I asked if they had been to the coliseum where they kill themselves at all cost, where the winner is the only one that is alive to claim victory and all the others dead. I said this is not the coliseum, this is not winner takes all or do or die affair and I did say that at the end of the day, it should be no vanquished, no victor and that both sides should consider it a win-win for everybody. I pleaded that the winner must accommodate the other persons”, the Omo N’Oba noted.

The Oba appealed to the governor to let bygone be bygone, and to “stretch out the olive branch for all sides to work with him. All hands should be on deck to work for Edo state and Edo people everywhere they may be proud to be”.

Wike, who was the Chairman of the PDP Campaign Council for the Edo governorship election was joined on the visit by of Governors Aminu Tambuwal of Sokoto, Seyi Makinde, Oyo State, Ahamdu Fintiri, Adamawa State, the host governor, Godwin Obaseki of Edo state and PDP South-South Vice Chairman, Chief Dan Orbih.

Speaking during the visit, the Rivers State governor said that the visit was a fulfilment of the promised they made when they paid the Oba a visit, the day the party flagged off its campaign in the state.

“Your Royal Majesty just like the governor of Sokoto state said when we came here to flag off the campaign of our brother Godwin Obaseki, we made a promise to you and the palace that by the special grace of God if Godwin Obaseki emerges as the winner, we will come back here and thank the Oba and the palace chiefs on the 19th of September, election was held and then on the 20th of September, Godwin Obaseki was declared as the winner of that election”, Wike explained.

The Rivers State governor added that PDP places much premium on the respect for the traditional institution, hence the party had come to ” thank the monarch and the palace leaders.

“You made a promise to us that as a traditional ruler, and as far as everybody is concerned, you are apolitical and so that you will not canvass for votes for anybody. What you preach is that there should be peace, there should be free and fair election.

“Your Royal Majesty, we have seen with our eyes indeed, there was a free and fair election.  Indeed, the election was peaceful. You said you will pray to our ancestors that in Edo, there shouldn’t be bloodshed and that is why the election was very free, was not violent and a leader has emerged.

“That is what we have come here to do today. We are not a party that will promise and fail, when we promise, we will deliver and to take your son now that he is back for everybody to unite together for the development of Edo State.”

In his remarks, the host governor, Obaseki, said that the PDP owed it a duty to preserve the traditional institution.

“You have kindly received us today, I want to assure you that as the governor of Edo state I have heard your admonitions. I want to promise that I will rededicate myself in my next tenure to the full service of Edo state and the people of Edo state. We will always rely on your wise counsel, we will always rely n you to pray for us and ensure that we the required peace so that we can do all the good things that God desires of us to do for our people.”