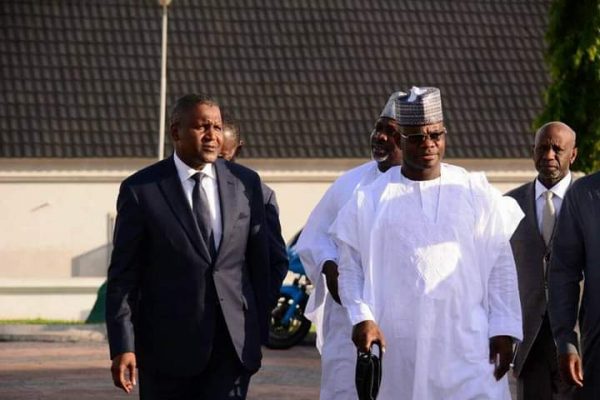 Kogi State Government and Aliko Dangote, owner of the disputed Obajana Cement factory have agreed to settle the dispute amicably, even as the National Security Council advised whoever feels aggrieved to take legal action instead of resorting to violence.

Though the two sides to the dispute had earlier agreed to resolve the issues amicably after the intervention of the Presidency, the National Security Council, at its meeting today, October 14, presided over by President Muhammadu Buhari, asked that the factory should be reopened for normal productive activities.

Briefing news men after the meeting today at the Presidential villa, the minister of Interior, Ogbeni Rauf Aregbesola, Chief of Defence Staff, General Lucky Irabor and minister of Police Affairs, Mohammed Maigari Dingyadi said that the Council noted the development in Kogi and as ordered the reopening of the cement factory that was closed down.

“The Council advised that all issues relating to that industry or factory should be resolved legally. Nobody must take law into his hands, either as a government or an individual.

“We are committed to guaranteeing and providing employment for Nigerians, so whatever will, in any way, hinder that must be discouraged.

“So in that regard, the cement industry in Obajana must be reopened and all issues that are in dispute should be resolved legally.”

They acknowledged that earlier, an agreement had been reached between the Kogi State government and the Dangote Cement in Kogi on the need to reopen the factory and to ensure that peace is maintained in the state.

“Government is committed to providing employment to the citizens, rather than closing factories that will make people unemployed.

“This was under the supervision and the intervention of Mr. President, through the Chief of Staff and we’re very happy to say that an amicable solution has been reached to bring to an end this very unfortunate development that has taken place in Kogi State.”

On the 2023 election, they said that the Council emphasized the commitment of the Federal Government to ensure a transparent, free and fair electoral process.

“So, we enjoin all political parties, individuals and Nigerians to pursue their democratic rights and interests with decorum, as all security forces and agencies are advised to maintain the law.

“The Council has decided that the National Security Adviser should put in place a strong team to investigate all issues relating to the discoveries of either abandoned oil pipelines, or illegal crude oil pipelines, so as to determine, one, the extent of such illegalities and perpetrators of such, and put a report for the Council and the president.

“A a committee will be set up by the NSA, in conjunction with the SGF, to investigate this issue of oil bunker because of the serious economic importance and to ensure that all those involved are brought to book.