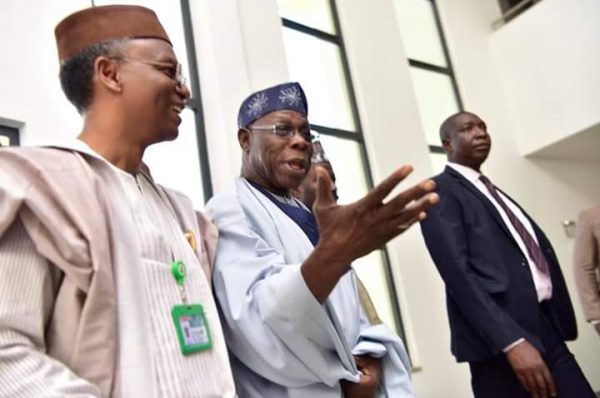 Former Nigeria’s President, Olusegun Obasanjo has described Governor Nasiru Ahmed El-Rufai as a near genius.
Obasanjo, who made a surprise visit to the Governor in Kaduna today, December 11, acknowledged that Governor El-Rufai is “one of the best persons to work with. He is a near genius.”
The former president who was a special guest at the extraordinary session of the Kaduna State Executive Council which was chaired by Governor El-Rufai, commended the state governor for putting together a pan-Nigerian cabinet with inter-ethnic inclusion.
“We need a character like this, a man that you know where you stand with him. Any job given to him will be well done.”
Obasanjo said that Governor El-Rufai is a good leader and a good student, adding that he learned gender inclusiveness from his administration.
“I made women to matter in my government. He has done the same in Kaduna. He is a very good learner.”
Governor El-Rufai who served as the minister of the Federal Capital Territory (FCT) under Obasanjo’s administration, also described Obasanjo as a mentor from whom he learnt many public service skills when he served in his administration.