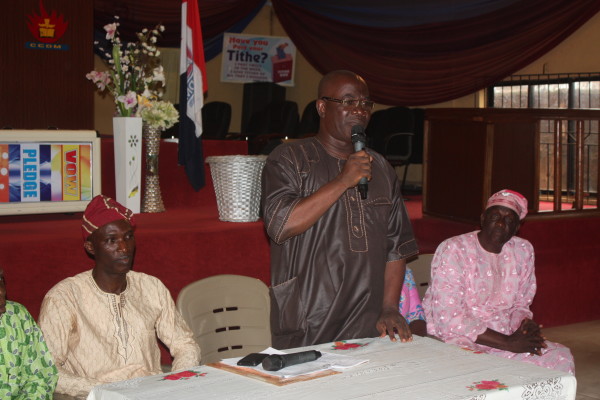 Ogun and Lagos State governments have given a seven-day demolition ultimatum to landlords and occupants of the 60,000 houses, including mosques, churches and public schools within the Water Pipeline area in Akute, Baale Akin-Osin and Oke-Aro communities in Ifo Local Government Area of Ogun State, even as elders and community leaders have sent a Save-Our-Souls appeal to the governors of the two states.

Among the affected buildings is the one housing the headquarters of News Express online newspaper.

Information reaching us showed that shock from the sudden notice by the Ogun State Urban and Regional Planning Board has already claimed the lives of two landlords while several others have taken ill.

The plight of the citizens, some of who have been residing in the area for over two decades, was the subject of a press conference held yesterday in Akute. It was addressed by leaders of the joint Community Development Councils (CDCs), who identified themselves as dual citizens of Lagos and Ogun states, controlled by the same All Progressives Congress (APC), which they claimed to have overwhelmingly voted for in the last general elections.

The community leaders and elders said that they are not against the Adiyan Water Project by the Lagos and Ogun State governments which is designed to benefit the public.

But, the grand patron of the CDCs, Alhaji Ganiyu Busari said that the communities want the Ogun State government agency to re-consider the measure of the specified area to be demolished instead of the expansive 50-metre “set-back” which could conveniently be reduced to 20 metres “set-back,” so that less houses would be affected.

“We wish to intimate the government that most of the affected house owners are aged and retirees who have no steady means of livelihood. Pulling down their homes will further aggravate their predicament. We also wish to call the attention of the government to the fact that any meaningful project should be people-driven.”

They said that accepting the 20 metres set-back would ensures effective synergy of the government water project as houses marked for demolition do not by any means constitute obstruction to the project.

The Community elders noted that most of the 50-metre expanse shall be reserved for machinery and equipment during construction work which, thereafter, may be abandoned, making it a hideout for hoodlums and social miscreants who constitute a burden for the law enforcement agents and threat to peace in the communities.   [myad]