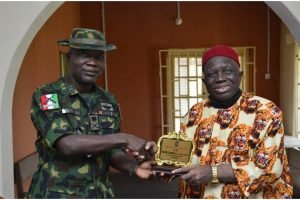 The world umbrella cultural body of the entire Igbo people, Ohanaeze Ndigbo, has made it clear that Ndigbo is a major stakeholder in the Nigerian project, even as it commended the Nigerian Army for restoring peace to the trouble Southeast.
The President General of the body, Ambassador George Obiozo, at a meeting today, August 4, in Enugu, with the General Officer Commanding 82 Division, Major General Taoreed Lagbaja, remarked: “without peace, nations cannot progress and without the Armed Forces, there will have been more problems.”
George Obiozo, who is former diplomat, described the Nigerian Army among the best in Africa and charged troops to continue to do safeguard the nation.
This was even as the Major General Taoreed Lagbaja commended the leadership of the Ohanaeze Ndigbo for the pronouncement against threats and violence by the Independent People of Biafra (IPOB).
The GOC assured the South-East people of safety, and warned those planning to cause further chaos to have a rethink.