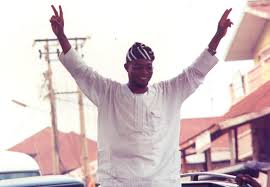 The Election Petitions Tribunal, hearing cases arising from the Osun State August 9, 2014 governorship election in the state, has dismissed the petition of the Peoples Democratic Party (PDP) candidate in the election, Senator Iyiola Omisore, challenging the victory of Governor Rauf Aregbesola of the All Progressives Congress (APC).

In the judgment, lasting over seven hours, the tribunal dismissed the prayers of the petitioner, alleging malpractices and substantial non-compliance of the poll with the Electoral Act as amended.

The petition was dismissed in a unanimous judgment, which started at 9.10am and concluded by 4.38pm, read by tribunal chairman, Justice Elizabeth Ikpejime. The judgment was read amidst heavy presence of security men at the court premises.

The tribunal held that Aregbesola, who scored 394,684 votes credited to him by INEC, was validly elected and returned as the winner of the poll. Omisore scored 292,747.

Three issues were formulated for determination by the tribunal.

The first issue was whether the tribunal has jurisdiction to hear the petitioner’s petition.

The second issue for determination was whether the election was vitiated by the reason  of alleged  substantial noncompliance with the Electoral  Act and the third issue was whether the first respondent ( Aregbesola) was validly elected and returned as the winner of the poll.

The first issue of jurisdiction, which the first respondent complained against in an application, was resolved against him.

The only issue, which was resolved in favour of the petitioner, which allowed his petition to scale the first hurdle put against it by the first respondent, did not avail him of victory at the end as the tribunal went ahead to expose the weaknesses in the  allegations contained in his petition.

On the issue of substantial noncompliance, the tribunal resolved the issue against the petitioner. [myad]