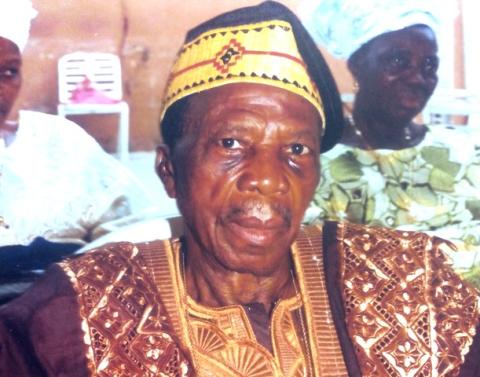 My story as told by my father, Pa Joseph Adeleye Obutu as earlier as I could comprehend anything and repeated several times till he died at the age of 88 was how he had a dream the night before my birth. He narrated that he was given a sword which he repeatedly swung  both ways and fell several of his enemies. Truly, it manifested in the physical when I was born the following day. That was why I was named Olusegun for ‘God’s victory’ and Ebenezer for ‘this is the extent to where God helped me.’
My earliest recognition of my father was when he seemed ill for some time, probably the hangover from the battle with his enemies. He wasn’t going to his farm then and I had to be left with him all days. I remember how he would give me money to buy a fresh loaf of bread everyday immediately I arrived to stay with him! He was living at his brother – Baba Ogunbuyide house then, while my mother was with her mother at Ogbonintun.
My daily fresh loaf was very unique then because roasted plantain was common for children. In my little mind then, I thought my father was so lonely with no one to stay with him and he had to be bribing me with bread everyday so that I could keep his company.
But I later grew up to know that his love for his children and humanity was unconditional. In fact, he was my first hero.
My father always shared one third of his dinner with us every night even though we would have earlier had our fill with our own food. Even when we were not there when he was eating, he would keep our share with the accompany pieces of meat. And in the morning, I cannot remember any that he did not wake us up to pray together.
His eyes were my first elementary school, then my high school and later university. One only needed to look at them to know where he stood on the wisdom of life.
Baba, your farm was so massive then with its endless labour. It was the symbol of your strength and aspiration for self reliance. As you combined your farming with trading in cocoa and agro allied products, you travelled extensively across Western Nigeria which exposed you to different plants which you introduced into your farm as you always strived to raise the bar. In fact, if there were equity and justice on what farmers were paid for their labour, cocoa and other products during your time, you would have been a billionaire.
Going to the farm with you had turned out to be the foundation of my enterprise. Your style was for us to be focus, to face the work of the day in the morning without wasting time breakfasting, and when we were through late in the afternoon, we would retire to the hut to prepare and eat to our satisfaction. Whenever your traps caught games, we would have a feast with pounded yam. Our soup made with tender cassava and cocoyam leaves without any spicing besides salt was the most delicious ever.
With your style, we conquered hunger with food only meant to be eating to live, not to live to eat.
Even when your health was failing lately, your strong will was still to be empowered and allowed to attend to your farm. While I’m grateful to God to be alive along with other children to plan a befitting burial for you, my wish was for you to stay a bit longer so as to taste more of your children’s dream.
You were progressively inclined with everyday yearning for justice and good governance in your country. Your love for education was unparallel despite only being self educated. Your laugh was deep, your smile was infectious and your principles were real.
Your virtues were hard work, honesty, integrity, love, resilience, fearlessness, contentment, absolute strong will and submission to the way of the Lord. Yet, you still combined these with high taste for good life and quality, which made you to stand out elegantly among your pairs.
Your virtues all combined are our crude oil, our mineral resources, your Will and the audacity of hope for us to explore to become whatever we wish to be in life. I only need to dream, and I will change the world.
I was still young then during the burial ceremony of your mother. I didn’t get to know her and your great father, Prince Obutu Akenzua. They called you and you called us ‘Abejoye’ (begged to be crowned) because when your father came from Benin Kingdom, the Itaogbolu elders persuaded him to become the king, but he declined, pleading that he came a long way there just to rest (simi). Not to take no for answer, they resolved that rest itself was a chieftaincy title, so they created and installed him as Imi of the Imi ruling house. Also from Iju, they invited your father to become Ogun Chief (Defence minister), he also declined with the same excuse, but that his children would take it in the future if they so wish.
The lavished burial ceremony for your mother was the greatest feast I’ve ever seen till date, with so many goats killed that the sighting of meat became so irritating to me for many months after.
That you could do that for your mother and showed us and humanity so much love, you deserve the best burial ever.
Rest in peace Baba.