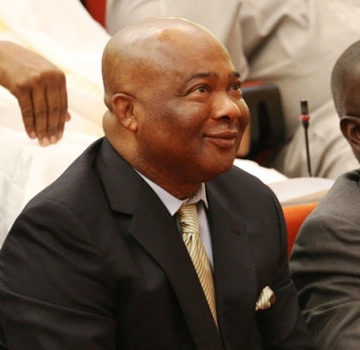 Governor Hope Uzodinma of Imo State has called on security agencies to investigate the current protests being staged in different parts of the country purportely  over the Supreme Court judgment on the election in the State.
Governor Uzodinma, who addressed members of the APC who staged a solidarity march for him today, January 20 in Owerri,the state capital, said that members of the Peoples Democratic Party (PDP) who protested against his mandate might have done so in futility.
He asked: “Why are they organizing rally in Bayelsa, organizing rally in Cross River, organizing rally in Abuja, organizing rally in Katsina? Its because they want to bring down the government of President Mohammadu Buhari.
“We are not going to fold our hands and watch it. I am therefore calling on the Federal Government through this medium to go into full investigation to unravel the idea and those behind this organized near-synchronized crisis.”
Governor Uzodinma recalled his ordeal and travails during the events that led to the March 9, 2019 election and advised the people in the state not to entertain fear but to go about their normal businesses without fear.
He said that the unity of Nigeria supercedes any other interest.

See also:  2023: I Want To Be President Of Nigeria, 38 Year Old Woman Declares In Lagos