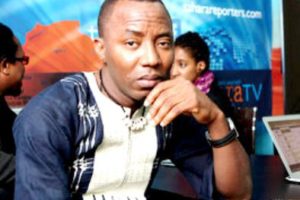 The police have arrested the publisher of SaharaReporters, Omoyele Sowore over an organized protest he led in the Federal Capital Territory (FCT), Abuja.

Sowore had yesterday, December 31, via Twitter, asked Nigerians to hold a crossover protest by picking up a candle and a placard showing their grievances against the Buhari administration.

The publisher and others were arrested today, New Year eve while on a #CrossoverWithProtest march.

Some of the protesters who escaped arrest said that Sowore was whisked away in one of the seven vans of the Nigerian police mobilised to the protest ground at Gudu junction in Abuja.

SaharaReporters said that Sowore who was a presidential candidate in the 2019 election, was taken to Abattoir police station in Logokoma, Abuja where he is being detained alongside others.

Sowore has clashed severally with the Buhari administration. He is facing treason charges for leading the #RevolutionNow movement.