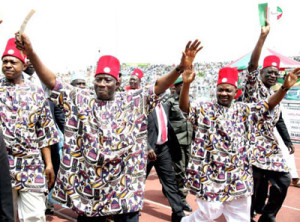 President Goodluck Jonathan, today, simply ignored the request by people of the South Eastern Zone of the country to use the unity rally of the Peoples Democratic Party (PDP), held in Enugu, hours ago, to publicly declare his 2015 second term interest.
Leaders of the Zone had, one after the other, mounted the soapbox and made two requests on the President: to declare his second term interest for the 2015 election and not to leave the venue of the unity rally without declaring such interest.
The South East leaders insisted that Jonathan must run for the 2015 election so that when he wins the second term, he would complete the job on the second Niger Bridge which he flagged off last month.
“We are not talking about the achievements of Mr. President since he became President and we are not talking about his plans for more development. The two things we are requesting the President to do for us in this zone is that he should declare his interest to go for second term in 2015 and the second one is that he should not leave here (Enugu) today without making such declaration,” almost all the leaders who spoke trode the same line.
However, when it was his turn to speak and respond to the South East leaders, President Jonathan carefully avoided the issue of his second term interest but instead, launched attack on opposition political party, apparently All Progressives Congress (APC).
The President took members of the opposition who described themselves as progressives to the cleaner.
“I don’t see anything ‘progressive’ about some of the opposition political parties.
“One party tags itself as progressives but where are they progressing to. It is only in such progressive party that you find an ex-governor determining who gets what and how. Is that what you mean by progressives?”
He also took a swipe on APC over ward congress and candidates’ selection, saying that the ruling Peoples Democratic Party (PDP) is the only democratic party in Nigeria because it is the only party that would not cancel ward congresses across the states without considering the wishes of its members.
He said that PDP is not like another party where a local government chairman can cancel a ward congress for no justifiable reason and without the peoples’ opinions.
Jonathan said the PDP is the only political platform in Nigeria where the voice of the people could count and decisions were taken based on the majority and popular vote.
“We are not like one party in this country where one man or a group of people determine how the party is run.
“The national chairman of the PDP or any of its governors can’t cancel a ward congress of the party just like that and with impunity. I, as the President, don’t even have the powers to do so, but it is happening in a political party in this country.”
Jonathan advised Igbo people to support the PDP, assuring them that the party “would not disappoint you.”
According to him, PDP is the only democratic party that could take Nigeria to join the rest of the democratic world.
“It is the only party where the President would not impose a candidate. It is the only party where people like me from a non-privileged background can stand here and talk.”
The President vowed that the PDP would capture Imo State in 2015 and complete the circle in the South-East.
“In the South-East, the PDP is total. Every state has a maximum of three senators and a minimum of three senators. It is now clear the South-East is a PDP zone.
“We will take over the governorship seat of the other state in the South-East come 2015. We have been very magnanimous but we are going to clear the seats totally.”
The Senate President, David Mark had earlier advised the President to ignore people that are criticizing his government and that he should remain focus in the transformation programme of his government.
Mark comforted President Jonathan by saying that if he stomach to criticisms, he would not be distracted, but would rather make him better.