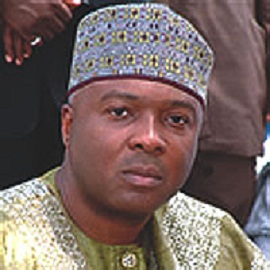 Youth group in the All Progressives Congress (APC) which goes by the name: New Generation Nigeria has called on the former governor of Kwara state and current senate of the federal Republic, Abubakar Bukola Saraki to come out and contest the 2015 Presidential election under the party.

In a statement jointly signed by it President, Alhaji Musa Abdulkadir, Secretary General, Otunba Philip Coker and Publicity Secretary, Chief Victor Anyawu the New Generation Nigeria said that Senator Saraki fitted their vision of dynamic leadership that should Nigeria to the Promised Land.

“Ahead of the 2015 general elections, politicians are at it again. It is a period where people who have failed their constituents would embark on ambiguous adventures to deceive the electorate. But the masses should beware of political hawks and vote out gerontologists by accepting change.

“That is why as a youth movement, we are calling on a former Governor of Kwara State, Dr. Abubakar Bukola Saraki to run for the Presidency in 2015 under the platform of our great party, APC for the following reasons:

1. There is need for generational change and there is no doubt that he is close to the youth. Saraki is the bridge between the young and old generation.

2. Having been Governor for eight years and now a serving Senator, he has both legislative and executive experience. He is a quality needed dearly in the attainment of good governance.

3. Saraki is a detribalized Nigerian, nationally known and acceptable; he is a technocrat and great professional, academically sound and politically relevant.

4. He is a cool, calculative and organized Nigerian who is nationalistic in vision and patriotic in nature. Saraki is a digital politician with extraordinary capacity for change.”

The APC youth group noted after 54 of independence, Nigeria has not fulfilled its potential, adding that it was time for a new generation to build a modern Nigeria.

“It is regrettable that 54 years after independence, we have failed to realise the dreams and aspirations of our founding fathers. We are ranked high among other oil oil-producing nations but in the global encyclopedia of economic development, Nigeria still lags behind. We import fuel and have no electricity. We have some of the best brains on earth, yet we cannot make Nigeria work. Saraki is a credible alternative.

“Nigerians are yearning for good governance from their leaders. We need good roads, good hospitals, good schools, adequate protection of lives and property where we will wish to take a stroll in the night without fear of being hacked down. We need constant supply of electricity, water, food to eat and a decent housing. We want sensible policies that create opportunities; to profit from our labour, to use our God-given abilities to improve our lot and to take care of our aged parents and siblings. We can only attain these with effective, capable, caring, courageous and visionary leadership. We require fresh ideas and new thinking. This is the kind of leadership Saraki exemplified even as Governor of Kwara State.

“He has promised to work tirelessly to get our economy moving; to provide security, housing and boost our agricultural production. Through him, we will educate our children, improve infrastructure and power supply, revamp our healthcare delivery system, empower our women, give opportunities to the young and enable the enterprising.” [myad]