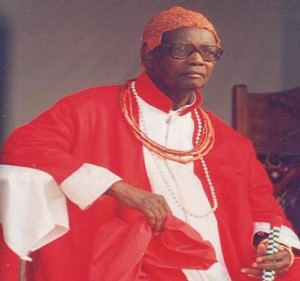 The Oba of Benin, Omo n’Oba n’Edo Uku Akpolokpolo Erediauwa I, has sent a blessing to President Goodluck Jonathan for a second term in office as President of Nigeria from 2015.

“He is praying fervently for him to be able to withstand the pressure. He sent me to let Mr President know that the spirits of the ancestors of the kingdom are with him and they will see him through. And also to pray that the opportunity will come for him to continue the good work he is doing in Benin and other parts of South South for at least another term.

“That is the commitment we have in this kind of special prayer coming from the Oba of Benin, my father. He is sending me as his eldest son to bring such a message. So, you can imagine the importance that my father attaches to such a message.”
He said that his father sent him to convey the message to the President “that we have been following the things that have been happening in the country. All these disturbances; the distractions that the President has been having. My father considers the President as his own son and he has sent me to present this special message to him.”
Ambassador Eheneden said that his father has also invited the President to kindly find time to have an audience with him in Benin, adding that the Oba does not travel so much now because of age.

“Basically, we are looking forward to receiving Mr. President for Baba to give him some fatherly advice and hopefully, it will be the beginning of continuous and continual pieces of fatherly advice my father will be given to Mr. President to guide him in facing future challenges and to urge him to continue his good work for the country.”