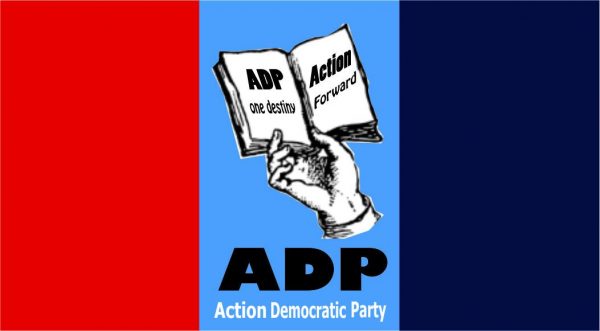 The Action Democratic Party (ADP) has pulled out of the PDP led coalition of political parties ganging up to wrest power from President Muhammadu Buhari led APC government in 2019, saying that it does not want to parley with those who destroyed the country in the first place.

The ADP said that it was never part of the arrangement in the first place as it was not in a hurry to hobnob with those who mismanaged Nigeria for sixteen years and now regrouping in an un-strategic haste to resume unprecedented loot of the nation’s treasury.

National Chairman of the party, Engr. Yabagi Sani said at a news conference that the party is the third force that Nigerians have been waiting for to take over power from both the PDP and the APC and provide the credible alternative to end killings, hunger and executive lawlessness.

“You will recall that on the 9th July, 2018, the People’s Democratic Party (PDP) in conjunction with about 34 other Political Parties signed a Memorandum of Understanding (MOU) to field a common Presidential Candidate for the 2019 general elections. The Parties are also to collaborate in several other areas to ensure that the APC-led Federal Government is defeated in the impending elections.

“Let me say here for the avoidance of doubt that we are not part of the Coalition of United Political Parties (CUPP). ADP is the third force that will provide the Credible Alternative Nigerians passionately yearn for to end hunger, wanton killings and executive lawlessness.

“At our inception in June 2017, we proclaimed to Nigerians that ADP is a child of necessity that will deepen democracy and good governance to establish the credible political platform that will rescue the country from the imminent collapse of the political space.

“We also promised that ADP will introduce a corruption free leadership selection process that will create a new leadership class with commitment, focus and force of will to rebuild the Country after the damage done by PDP and APC.

“We vowed that we would provide an All-inclusive Governance Model that would mobilize and unite all Nigerians to build a new nation.

“It is incontrovertible that the PDP and APC are two sides of the same coin. For sixteen years, PDP ruled this country with impunity and without regard to the universally accepted norms of democracy. Stealing, misappropriation and all forms of corruption became parts of the state policy.

“ADP is not prepared to jettison its values and constitutional provisions like the use of direct primaries as against the often used corrupt delegate system by the other parties in the Coalition.

“ADP is also not in a hurry to hobnob with those who mismanaged Nigeria for sixteen years and now regrouping in an un-strategic haste to resume unprecedented loot of the nation’s treasury.

“It is important to know that those who pushed Nigeria to the precipice are the drivers of the Coalition and have nothing new to offer. To collaborate with them, is to sleep with strange bedfellows.

“The ADP is not averse to any political Coalition that can bring about a positive overhaul of the Nigerian system. But this shall be done with true patriots who are not a part of the Nigerian problem.

“In the desire to acquire power, we shall not compromise the basic principles and ideology that informed our birth which includes All-inclusiveness, Democratic Empowerment of the Youth/Women and Party Supremacy.

“We find it extremely difficult to compromise our principles and align with ‘ANYTHING BUT BUHARI.’ Let it be known that for us, it is not negotiable that Buhari must go. He has failed and those who love him should tell him that his time is up.

“At ADP, we believe the time has come for a generational shift in leadership and not putting old wines in new bottles, which are what the PDP led coalition represents.

“It is instructive to remember that it was a similar ragtag coalition that brought the rudderless APC to power in 2015, so Nigerians must wake up and resist another deceit by the same desperate and corrupt politicians.

“We are committed to the birth of a new Nigeria that offers hope to all. We shall pursue policies that will ensure transformation in Health, Education, Infrastructure, Security, Employment etc. What Nigeria needs is a new direction championed by true patriots. ADP is determined to drive this process.

“We shall be calling on like-minded Patriotic, God fearing and credible Nigerians who are determined to join the ADP led coalition to rebuild Nigeria and make our nation the pride of Africa, fulfilling its God given potentials, purpose, and promise of happiness.”

The Alliance for New Nigeria (ANN)had also earlier pulled out of the coalition, saying that members will not be part of any alliance that will take “the country back to Egypt.”