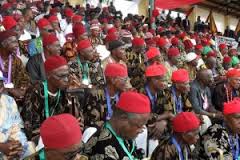 The apex Igbo socio-cultural organization, Ohanaeze Ndigbo Worldwide, has formally endorsed Peter Obi of the Labour Party as its presidential candidate for the 2023 general elections.

The Igbo political group said that by the principles of zoning and rotation of power in Nigeria, it is the turn of the South East of Nigeria to produce the president in 2023.

In a statement yesterday, November 20, signed by its National Publicity Secretary, Dr Alex Ogbonna, stating its stand in the ongoing political realignment in the country, Ohanaeze said that the Labour Party’s candidate had filled what could have been a sad gap if he had not been on the ballot.

The statement reads: “In the first place, going by the principles of zoning and rotation of power in Nigeria, which have been in existence since 1999, it is the turn of the South East of Nigeria to produce the president in 2023.

“Second, Ohanaeze Ndigbo has canvassed to various eminent persons in Nigeria, seeking their support for the presidency in the South East come 2023. We are delighted by the responses from various groups and highly placed patriotic Nigerians.

“Third, Ohanaeze works in collaboration with the Southern and Middle Belt Leaders Forum (SMBLF), comprising the Afenifere, PANDEF, Middle Belt Leaders, and Ohanaeze Ndigbo led by an elder statesman, Chief E. K. Clarke. The group, in its quest for Nigerian unity, peace, and sustainable national development, has endorsed Mr Peter Obi as its candidate for the 2023 general elections.

“On the other hand, Ohanaeze brought a commodity to the market, and now the world is clamouring for it. We are rather excited, happy, and fulfilled that Nigeria is now in full possession of the commodity.”

Ohanaeze said that it endorsed Obi not only based on equity and justice but also on “merit, competence, a track record of accomplishments, and the veritable ideas that Obi espouses for a better Nigeria.”

The apex Igbo body noted that despite concerns that Labour Party had no structure, the Obidient Movement is “a massive disruptive reaction against the deplorable Nigerian pathologies.”

“People use the Obi phenomenon to express dissatisfaction with the status quo. It is a revolt against injustice, poverty, unemployment, corruption, and all other forms of vicious circles that have become the trademark of Nigeria. In other words, every revolution is a structural change.”