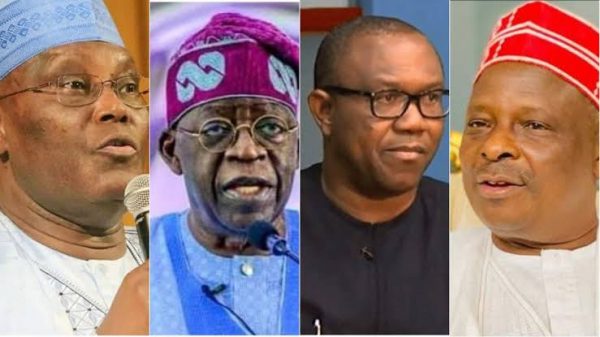 Top Yoruba leaders, under the umbrella of South West Development Stakeholders Forum (SWDSF), comprising civil society organisations, professionals and religious leaders, have insisted that Presidential candidates of notable political parties in the country should hold town hall parleys with them.
At the meeting last week, Thursday, December8, the Forum called for a parley with presidential candidates of major political parties as soon as possible, in Ibadan, Oyo State.
In a communiqué, the Forum drew attention to the fact that the region is the industrial and commercial engine room of Nigeria, saying that all matrices clearly show that the Nigerian economy is driven by economic activities in the South West of Nigeria.
“Given its growing population of  more than 50 million residents, its historical trajectory as the commercial nerve centre of Nigeria, its strategic political importance, and huge potential in driving  national growth and development; the region deserves to know from the presidential candidates exactly how they intend to incorporate the South West in their agenda for a united, peaceful, and prosperous Nigeria.
“The South West can also boast of having residents from most, if not all, ethnic nationalities of Nigeria. We are the biggest, non-discriminatory, melting pot for Nigerians and their social,  commercial and other development activities and therefore deserve the critical consideration of all  candidates.
“With just over two months to the general elections, there is a need for the Presidential, as well as the region’s Gubernatorial and Legislative candidates, to pronounce their plans for a concrete development agenda for the South West Region.
“The South West Development Stakeholders is willing and ready to  bring the Presidential candidates to the table to address Yoruba people, and indeed all Nigerians living in the South West, of specific plans to make them true stakeholders in the new unfolding federation.”
The communiqué which was signed on behalf of others by a handful of the leaders, said that detailed plans for the parley will be announced soon.
Those who signed the communiqué are Dr. Alao Adedayo, alao_adedayo for Yoruba World Center; Otunba Ayodeji Osibogun, for Yoruba Ko’ya Leadership and Training Foundation; Sir Gbenga Adebusuyi adegbenga for Majeobaje Community Development Initiative and Prince Kayode Adeyemi for ODU’A CCIMA.
Others are Mrs. Foluso Oyenuga for Professional Women Group; Dr. Ayo Famuyide Egbe Omo for Yoruba North America amongst others.