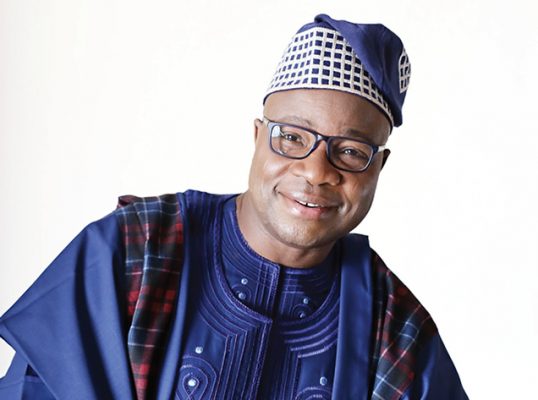 The Osun State governorship candidate of the Accord Part, Dr. Akin Ogunbiyi has described himself as the new Chief Obafemi Awolowo, in view of his revolutionary agenda as as containedin his manifesto for the state.

Ogunbiyi spoke at his Campaign Office in Osogbo while hosting about 50 leaders of the All Progressives Congress (APC) from across the state who said they decided to support his ambition having seen him as the best among other contenders to the government House.

The Accord party flag-bearer who promised to lift his state out of the monolithic economy as a “civil servants state” by making use of the state’s abundant resources in agriculture, mineral resources and the large human capital deposits.

He said that he has the ability to start things from the scratch and see to their fruition just as he did when he ventured into his conglomerates in the corporate world.

Ogunbiyi said that apart from the God given resources in the state, he will make use of Osun people who “are highly educated and enterprising and who can be found in all walks of life” in breaking the monolithic economy jinx.

“I am a local boy. I have my primary and secondary education at Ileogbo and my first degree at Ile-Ife. I am well trained, exposed and experienced to do this”, he said.

Ogunbiyi, who is an insurance magnate said that apart from giving education attention it deserves, his first steps will be recruiting new teachers and retraining the old ones. “Our teachers will be motivated, trained and promoted.”

He promised to fully engage in all sectors of agriculture including crop production, livestock, forestry and fishing and make the state the food basket of the entire South-West.

“Agriculture is a multibillion dollar investment. We can produce another Awolowo, somebody that has the intellect, the capacity and the experience to develop something little to something bigger. I will go all out to be that person,”

Late Chief Obafemi Awolowo was a legend, a statesman, a cerebral politician who was highly adored especially among the Yoruba people because of his prowess and great achievements as the first premier of the old Western Region.