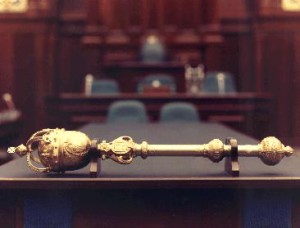 A drama is playing out in Adamawa state as members of State House of Assembly who commenced the procedure towards impeaching the state governor, Murtala Nyako, his deputy, Bala James Ngillari ran away from the state immediately after directing the House clerk to serve the duo notice of impeachment,  as the troubled governor and his deputy also took to their heels.

Reports reaching us indicated that the lawmakers, the governor and his deputy are now taking refuge in the nation’s Federal Capital Territory.

It was gathered that the lawmakers fled the state for fear that they might be attacked by people loyal to the governor and his deputy, thereby stalemating the impeachment process.

Was learnt that the  clerk, who should have served the impeachment notices to the governors and his deputy could not deliver them because he when he arrived at the Yola Government House, the offices were shutdown. [myad]