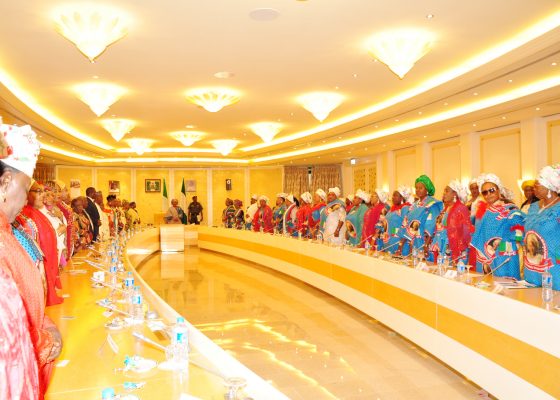 Wife of the President, Mrs. Aisha Muhammadu Buhari has challenged women leaders of the ruling All Progressives Congress (APC) to rise up for the electioneering campaigns towards the 2019 general elections.

She advised the women, including new members as well as dissenting voices within the party to be united in preparation for future elections.

Aisha Buhari, who spoke when women leaders of the APC called on her at the Presidential Villa, Abuja, noted that women make up the larger part of voters that eventually determine the outcome of any elections.

Commending the party’s unique tradition of uniting through dialogue, Aisha Buhari turned advised young women to take over the political space in order to play their part in national development.

She asked them to vie for offices at the lowest levels as that is where they will make the most impact.

She used the opportunity to call on the party to operate within the guidelines of the constitution and implement the 35 percent affirmative action in order to improve women participation in governance.

The National Woman Leader of the APC, Mrs. Salamatu Baiwa Umar-Eluma assured of the unwavering support of the executives to the government of President Muhammadu Buhari and his change agenda, promising to birth a network of collaborators which is strongly grass rooted and women-inclined.

She promised to initiate and sustain programmes for the advancement and empowerment of women and to mobilize them for political participation. She also promised to promote legislation in favour of women’s rights.

Mrs. Baiwa also spoke of the plan of the executive to set up a framework to tackle all issues bordering on the political and socio-economic development of the Nigerian woman.

The delegation was made up of national, zonal and state women leaders as well as some female aspirants. [myad]