Home NEWS POLITICS All Rent Seekers Milling Around Atiku Will Make Him To Lose 2023... 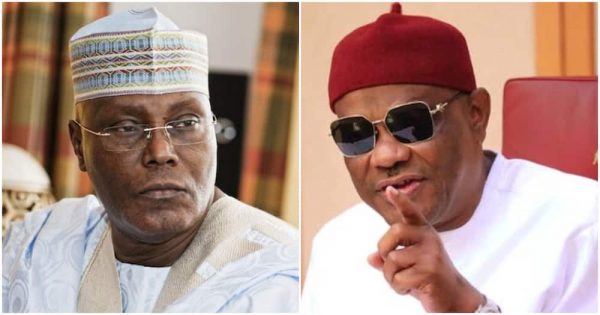 The Rivers State Governor, Nyesom Wike has said that people around the presidential candidate of the Peoples Democratic Party (PDP), Atiku Abubakar may hinder him from winning the 2023 election.

Governor Wike, who spoke today, August 12 in Port Harcourt during the commissioning of the Rivers State House of Assembly Quarters built by his administration, said that the people who always want to be seen around Atiku in Abuja may eventually cost him the presidential election because they are going about it the wrong way.

Governor who said that he had already made his mind known to Atiku about those around him and how their activities may eventually cost him the presidential election if he doesn’t do the needful quickly, said: “I have told the candidate, you will win or lose this election because of people around you.

See also:  How I Will Defeat Terrorists, Bandits, Other Criminals - Tinubu

“This should be the focus of all true lovers of PDP who want electoral victory. You’re supposed to be talking about how you will win election. All these rent seekers around him (Atiku) are not doing him any favour. Rather they are trying to make him not to win election. But if that is what they wish, I wish them good luck.”

“You see that I am not talking. I am doing my work, so leave me to do my work. Those concocting ideas every day in social media cannot make you win election. Election is about the people and by the people. Those in Abuja with you (Atiku), tell them to go home and campaign for you to win election. Leave Wike alone, enough is enough.”