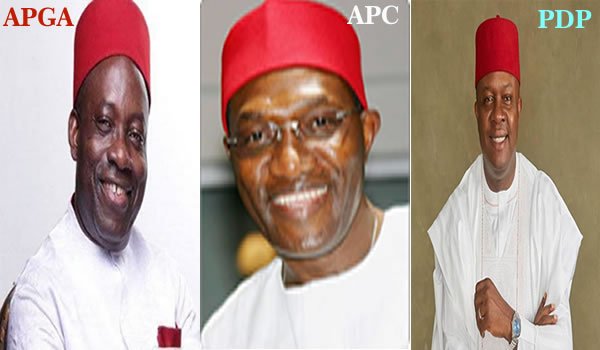 Former Governor of the Central Bank of Nigeria, Professor Chukwuma Soludo of the All Progressive Grand Alliance (APGA), the former President and group executive officer of Transcorp, Valentine Ozigbo of the Peoples Democratic Party (PDP) and an old political horse, Senator Andy Uba of the All Progressives Congress (APC) have emerged as candidates of their parties to face Anambra State electorates in the governorship contest come November 6 this year.

Professor Soludo had earlier in the week, won the primary election in the faction of APGA, even as the other faction suspended him for alleged anti party activities.

His election at the party’s primary, which went into controversy, was later confirmed by the Independent National Electoral Commission (INEC).

The PDP primary, which threw up Valentine Ozigbo as candidate, was held yesterday, June 26 at the Professor Dora Akunyili Women’s Development Center, Awka.

Head of the electoral panel, who is the Edo State Deputy Governor, Philip Shaibu announced that Ozigbo polled 62 votes to win the primary.

This was even as a faction of the party held a primary at Paul University, Awka and elected Senator Ugochukwu Uba as the governorship candidate.

Meanwhile, Chairman of the APC primary election committee and governor of Ogun State, Dapo Abiodun, announced the election of Senator Andy Uba today, June 27, saying that Uba polled 230, 201 votes out of 348, 490 votes cast at the Golden Tulip Hotel in an open ballot process.

APGA has been the ruling party in the state for over a decade.

Those Killing In Anambra Are Testing My Resolve, Gov Soludo Fumes