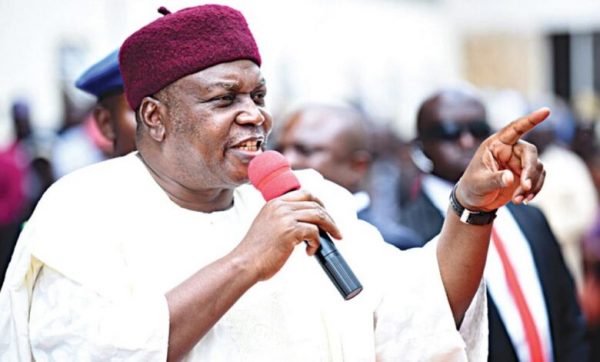 Angry delegates of the People’s Democratic Party (PDP) in Taraba State stoned the convoy of the state Governor, Darius Ishaku and his Deputy Haruna Manu at the Catholic Pastoral Centre Jalingo.

Shortly after, the state Governor’s convoy drove into the arena but was not allowed to stop as the delegates started stoning the convoy insisting that they did not want to talk to the governor and leadership of the party.

Some of the delegates who expressed their feelings said that they were not comfortable with the imposition of the state PDP party Chairman as an aspirant when he was never a part of the process until barely forty-eight hours to the primaries.

Posters of Chairman of the party, Kefas Agbu who had earlier denied being a part of the governorship race in the state had suddenly sprung up all over the state capital, Jalingo shortly after the former Minister of Defense, General Theophilus Danjuma flew into the state and allegedly anointed him as his candidate for the party’s flag ahead of the 2023 general elections.

However, the action sparked widespread condemnation and agitations from stakeholders who insisted that they would not have the elder statesman impose a candidate on the party again, more so that the candidate is the seating Chairman of the party and from the same zone as the current governor who is about to complete his second tenure in office.

At the time of going to press, the primary election which is slated to hold at the Jolly Nyame stadium was yet to commence.