Home NEWS POLITICS Any Yoruba Oba Who Endorses Presidential Candidate Is Courting Trouble From His... 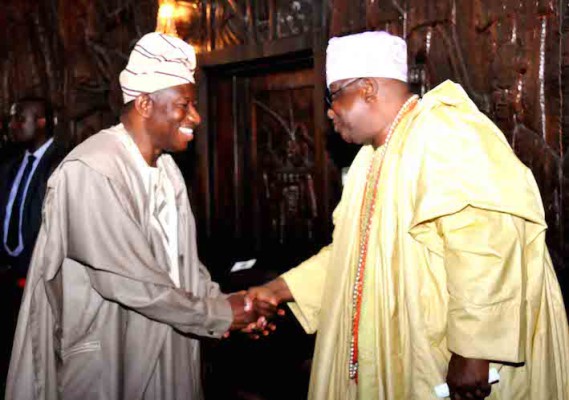 The Awujale and Paramount ruler of Ijebuland, Oba Dr. Sikiru Kayode Adetona has made it clear to President Goodluck Jonathan who is seeking for re-election for second term that he is not in a position to tell his subject who to vote for and who not to vote for in the March 28 election.

Oba Adetona who paid a host to the President at his palace in Ijebu-Ode during a presidential visit to his palace, asked the President to present his programme to the people of Ijebuland for them to form their opinion on whether to vote him or not.

Others at the meeting include, the Munister-designate, Musiliu Obanikoro, Chairman , Mobilisation and Organisation committee of the People’s Democratic Party in the South West, Prince, Buruji Kashamu , the PDP governorship candidate in the state, Gboyega Isiaka , PDP leaders as well as some members of All Progressives Congress and Social Democratic Party.

According to Awujale:”In Ijebu here, it is not possible for any Oba, not even in Ijebu, in Yorubaland, to go out and say vote for this, vote for that: that person (Oba) is looking for trouble, but give them the opportunity to present their programme so that people can make up their minds on what to do. I think this is a very sound democratic principle and that is what I have decided to do. To give you the opportunity of meeting with the people. [myad]