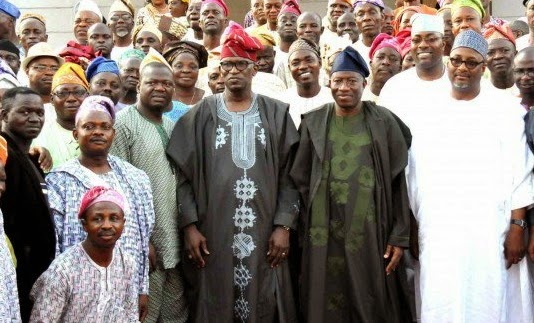 All Progressives Congress (APC) Presidential Campaign Organisation has drawn the attention the South-west to the booby trap embedded in the repeated promise by President Goodluck Jonathan to implement the report of the National Conference which it said contains nothing that approximates to their collective interest.
APC said that while it did not oppose to any group supporting any candidate for the forthcoming general election, but that a recent purported endorsement of Jonathan by former Confab conferees from the South-west was predicated on spurious and utterly dishonest reason.
“It is necessary to state that all points of the Yoruba agenda that could have favoured the South-West, in­cluding regional autonomy, restructuring, devolution of power and parliamentary system could not sail through at the conference. These people knew that though they deceived Nigerians, particularly the Yoruba people, with the ostensible reason, but the real reason for the endorsement was the because of their personal economy.
“Some of them have had their personal finances transformed by way of juicy but dubious security contracts and handsome cash largesse by the government of Dr. Goodluck Jonathan at the expense of Nigerian people.
“We consider it asinine that any group can predicate its support for Dr. Goodluck Jonathan on his promise to respect any agreement. The antecedents of Dr. Goodluck Jonathan speak eloquently of a serial promise breaker, unreliable keeper of gentlemanly agreement and unabashed turncoat! It would be recalled that the first real show of Dr. Goodluck Jonathan’s immense capacity for not keeping to pacts was when he, in 2010, conveniently walked away from his party’s North/South zoning arrangement, of which he was signatory to, with indescribable villainy. There is virtually a litany of reports from committees, which he empanelled, that have remained unimplemented in his four-year presidency thus far!
“Dr. Goodluck Jonathan, as President, who refused to assent to the Bill that will empower Nigerians with disabilities, is doubtful would ever contemplate supporting better life for Nigerians without disabilities.”
The APC, in a statement by Director of media and publicity for its Presidential Campaign Organisation, Garba Shehu said that of all the four hundred and ninety two (492) members of the National confab members, none was elected by the people.
“A comparison of this arrangement with that of the Constituent Assembly of 1977 revealed a conference that had most of the members elected by the people and which naturally brought on the 1979 constitution. We are appalled that despite the pretences of members of this group to democracy, they thought it fit to attempt to stampede a Nation to giving assent to a piece of document that bore the imprimatur of a negligible minority. Truth be told, the conferees of the Confab were not representatives of the people!”
APC said that it is on the basis of the foregoing that it saw the purported endorsement of President Jonathan by members of this group as “infernal, jejune, and meaningless. We urge the people of the South West to discountenance this as another distraction from the stable of the utterly despicable but desperate regime of Dr. Goodluck Jonathan.” [myad]