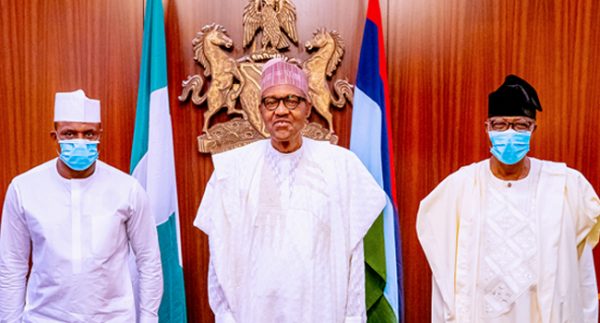 New converts to the ruling All Progressives Congress (APC), former Speaker of the House of Representatives and a strong member of the opposition Peoples Democratic Party (PDP), Dimeji Bankole and former Ogun State Governor, Gbenga Daniel have stormed Aso Rock Presidential villa, Abuja.
They were received today, March 21 by President Muhammadu Buhari.
Dimeji Bankole and Gbenga Daniel recently defected to the APC.
The two leaders were accompanied to the Presidential Villa by the Chairman of the Caretaker Extraordinary Convention Planning Committee (CECPC) of the APC, and Governor of Yobe, Mai Mala Buni,  Governors of Jigawa State, Mohammed Badaru and that of Kebbi State, Atiku Bagudu.
Gbenga Daniel was governor of Ogun State from 2003 to 2011 while Dimeji Bankole was Speaker of the House of Representatives between 2007 and 2011, on the platform of the PDP).
Details later…