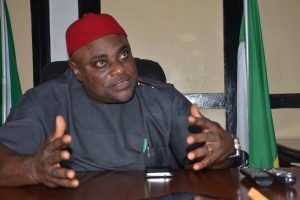 All is not well with the All Progressive Grand Alliance (APGA), as a group under it, known as APGA Aggrieved Forum, has given the party’s Board of Trustees (BoT) a nine-day ultimatum to sack the National Chairman of the party, Chief Victor Oye, or face abysmal failure in the March 9 governorship and State House of Assembly elections.

The group, made up mainly of aspirants of the party in last year’s primary election, warned the BoT chairman of the party who doubles as Anambra State Governor, Chief Willie Obiano, not to joke with their demand as such would spell doom for the party.

The group made it categorically clear that if Obiano failed to do their bidding, APGA would fail woefully in the state parliamentary elections especially in Anambra State.

Speaking to news men in Awka, the spokesperson of the group, Onyeka Mbanaso, alleged that APGA under the leadership of Oye, had performed poorly, and that failure to put him aside would see the party being overrun by the opposition in the coming elections.

“We are giving Anambra State governor, Chief Willie Obiano nine-day ultimatum to sack the national chairman of the party, Chief Victor Oye,” adding that they wanted him to return monies he made from aspirants during the primary election.

“What happened in last Saturday election where APGA performed poorly is a preamble of what will befall the party during next week’s House of Assembly election across the 30 state constituencies if necessary action is not taken.

“So, we the aggrieved members of this party, are calling on the Board of Trustees Chairman who is also the Governor of Anambra State, Chief Willie Obiano, and other concerned stakeholders to sack Chief Victor Oye.”

However, Oye in his reaction said the aggrieved members were an insignificant few, that were merely seeking a way to cause division in the party.

Oye boasted that APGA had never been as strong as it was now, stressing that the party put up a strong fight in last Saturday’s election and as a result won 11 House of Representative seats across the country.

“APGA is the third biggest political party in the country. We all know why last Saturday’s election went that way, and I can assure you that the House of Assembly election will be a totally different ball game.”