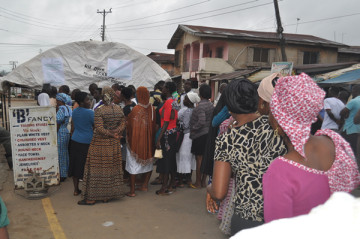 Governor Aregbesola had arrived with his wife, Sherifat, at about 10.40am at his Unit 1, Ward 8 Polling Unit at Ifofin to cast his vote. He described the turnout of the electorate as impressive.

The governor, who was accredited at about 10.43am, said he was happy with the conduct of the exercise in his ward.

He said though he could not use the situation in his ward to assess the over all performance of INEC, he was happy with what he saw in his ward.

The governor said the enthusiasm of voters had re-affirmed the democratic consciousness of the people.

He said, “These people (voters) are more democratic than most of us. They are passionate and conscious of their democratic obligation.

“I wish the leadership of this country will be more passionate in building a just and democratic society.”

The governor, however, condemned the reported arrest of some people who he claimed were his party leaders.

The PDP candidate, Omisore, who presented himself for accreditation at his Moore Ward at 11.27 am, described the exercise as largely successful.

The PDP flagbearer, who said that the turnout of voters at Ile-Ife was impressive, reiterated his commitment to ensuring a peaceful conduct of the election.

Meanwhile, Labour Party candidate, Alhaji Fatai Akinbade, says he is still in the governorship race. Akinbade spoke after being accredited at his Ward 3,Unit 1 Polling Centre at his Ogbagba home town

Akinbade was accredited at about 9.28am and he expressed confidence in the ability of INEC and other security agencies to ensure a successful poll.

The governorship election started smoothly with large turned out of voters at various polling centres. Reports reaching us showed that voters started to pour into the polling centres for accreditation as early as 6 a.m. ahead of the official time of 8 a.m.
Reports said that despite a light rainfall in the early hours of today, the turnout was impressive.
Alhaji Bamidele Suleiman, a party ward collation agent, said more than 100 voters had arrived in Unit 19 Ward 5 in Osogbo Local Government Area as early as 6.30 a.m.
Voters at PU 002 in Oloki/Akoda, Ede South LGA Photo By Dapo Akinrefon.
In Ward 001, Ataoja E, many voters said they were in the ward early to do accreditation in time to cast votes as quick as possible.
Mrs Titilayo Amoo, one of the voters at Unit 16, Osogbo Local Government, said she led some other women to the unit early enough to participate in the election.
Mr Jolayemi Gabriel, 76, said he was impressed that elder citizens such as himself were at the polling unit early enough.
However, Sulieman alleged that the opposition party APC was providing canopies for voters, saying that it was not in line with INEC guidelines.
Reacting to the allegation, Alhaji Bashiru Ajebade, the leader of Ward five Oke-Arungbo community in Osogbo Local Government Area, said the canopies were provided by members of the community.
He said they were to be used in the event of rainfall and to provide shade for the elderly voters.
Mr Kayode Odewale from the same ward, however, expressed satisfaction with the turnout of INEC and security officials.
He commended voters for coming out on time to vote. Among the voters, who came out early for accreditation, were elderly women and men.
At Ward four, polling units 19 and 20 on Old Governor’s Office, Osogbo, accreditation did not start on time in spite of a massive turn-out of voters.
The Presiding Officer, who wished to be identified as Oluwasheyin, apologized to voters for the “slight delay’’, adding that they faced some little challenges in setting up some structures, coupled with the rain shower.
She appealed to voters to be orderly and remain within the vicinity of the centre, to enable them to vote immediately after accreditation at 12.30 p.m.
At Ward 20 of the centre, election materials arrived at about 7.20 a.m. where a Presiding Officer, Festus Okoli, said they were well secured.
Some of the voters whose names were in the voters’ register, said they were not listed alphabetically as they expected.
The correspondents monitoring the exercise in Ilesa West and East local government, report that many voters had queued as early as 6.30 a.m. waiting to be accredited.
At Unit 10, ward five, at African Church Grammar School, Ilesha West, anxious voters were already in the queue waiting to be accredited.
Mrs Adebimpe Oluwole, a 65-year old woman,said that she arrived at the polling unit at about 6:30 am waiting for accreditation.
At Ilesa East, units 1 and 2, at Oke Obanla, large numbers of voters were seen checking their names on the register.
There was heavy presence of security operatives in each of the polling units.
At the Unit seven, ward 1, at Igbogi Junction, Orinkiran, the exercise which started at 8 a.m., also witnessed a huge turnout of electorate for registration, with many of them checking their names on the register.
Miss Abifoluwa Olorode, INEC ad hoc worker, said that she arrived at the unit around 7: 05 a.m.
Olorode said the turnout of the electorate was impressive.
Unit one, Ward eight, Ifofin, Ilesha East which is the polling unit of Gov. Rauf Aregbesola, the All Progressives Congress (APC) candidate for the election, witnessed a huge turnout of voters.
Mrs. Sarafat Aregbesola, the mother of Gov. Rauf Aregesola, was the first voter to be accredited.
Aregbesola said she was impressed with the turnout of the voters for the accreditation.
She expressed the belief that her son, Aregbesola, would be re-elected.
However, voters’ accreditation started at 8 a.m. in most of the polling units at Ilesha West and East local government areas.
At Ward 1 in Ilode near Ife, accreditation started at 8 a.m. with appreciable turnout of voters.
Mrs Funke Akanni, a voter and Alhaji Hassan Arogundade, 85, said they came out as early as 8 a.m. and everything was peaceful.
The PDP National Secretary, Mr Wale Oladipo, commended INEC for adequate preparation and arrangement, saying there was enough security. [myad]