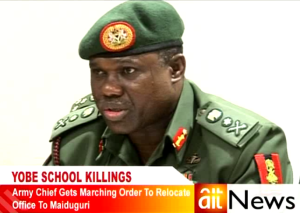 Nigerian Army has admitted that members of the deadly Boko Haram actually captured and occupied Damboa, Manga, Wanga, Delwa and Mustafari villages all in Borno state, but that special forces from the military, newly created, have retrieved the villages.

Director of Defence Information Major General Chris Olukolade said in a statement that Boko Haram had already mounted their flag, a symbol of conquered territory, before the Special Forces dislodged them.

According to him, the 600 men Special Forces were deployed in Gwoza specifically to recover the villages occupied by Boko Haram, adding that scores of members of the sect were killed in the process.

General Olukolade said that the troops have severally engaged Boko Haram in fierce encounters and have been arresting terrorists who had held Gwoza and its surrounding villages hostage.

“Special Forces in the ongoing counter-terrorism campaign have cleared Delwa, Mustafari, Manga, Wanga and Damboa of terrorists who have been rampaging in the communities.

“The special operation, which began early in the week, is meant to restore law and order to the area and apprehend all terrorists who have been operating in the locality.

“The operation, which has so far lasted 40 hours has dove-tailed into the mop up phase during which the remnants of insurgents are being cleared from the communities.

See also:  I Am Not Too Comfortable With Atiku After Obasanjo Endorsed Peter Obi – Gov Wike

“The mop up phase will also ascertain the casualties as additional efforts are also been made to ensure the protection of innocent civilians during the operation.

“Meanwhile, troops are also involved in manoeuvres to apprehend terrorists who have been attacking Gwoza and surrounding localities since Tuesday, causing the death of many civilians.”

A military source added: “The battle in Gwoza is fierce because the Special Forces have been pursuing the Boko Haram members to the hills in the area. Their efforts are complemented by massive aerial bombardments.

“Certainly, it will be a battle to the finish this time around with the insurgents in the affected areas.

“They have almost taken over a quarter of Borno State; we will never cede any part of Nigeria to the insurgents.”

It was gathered last night that the Emir of Gwoza was relocated to Maiduguri to avoid a repeat of the killing of his father, the late Emir Idrissa Timta in May. [myad]