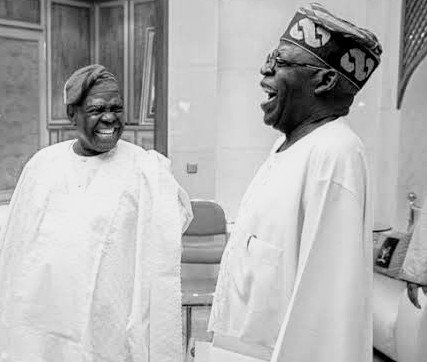 The National Leader of All Progressives Congress (APC), Asiwaju Bola Ahmed Tinubu has said that weak and mean politicians have turned to rumour and fear mongering because their true appeal to the people is limited and uncertain.

“These desperate operatives stir resentment of others as a way to get the support of the people. Politicians of this ilk are afraid to stand before the people on their own two feet. They use lies and deception as their crutch.”

Asiwaju Tinubu, in a statement by his media office, was reacting to what he called ‘rumour going round that he is at present in Kano and meddling in the Kano elections.’

He said: “for the record, Asiwaju is not in Kano and has not been in Kano at any point during the conduct of these elections. The picture that these liars are circulating of Asiwaju and Governor Ganduje is one that was taken last year when the governor visited Lagos. The fear-mongers know the picture is old and was taken in Lagos. They still use it because their relationship to the truth is an adversarial one. Scratch a liar and you will find a hypocrite as well.

“These people encouraged and cheered when former Vice President Atiku Abubakar and outgoing Senate President Bukola Saraki led a posse of Peoples Democratic Party figures into Lagos, boasting they were going to “capture Lagos” during the governorship elections.

“These people did not call Atiku and others to order for interfering in Lagos. Instead, they urged Atiku and others to undertake this misadventure. The All Progressives Congress did not cry and lament that Atiku came to Lagos to swing an election that did not concern him. Instead, we rose to the occasion and relied on our organic and positive relationship to the people. With regard to the impact these PDP operatives had in the Lagos election, let it be said that they came, they saw, they lost and they left with nothing in hand but another defeat.

“Regarding the people of Kano, Asiwaju has nothing but the utmost respect and admiration. Kano has historically stood as a bastion of progressive politics. Its brand of politics helped inspire the establishment of the APC. Kano has an enlightened electorate that will vote as they believe. Asiwaju hopes that they will disregard the lies and rumors about him and remain faithful to their progressive tradition.

“If the people do so, then they would have voted in their best interests and that is for the APC, the party of President Muhammadu Buhari.

“Let us all join in making an important observation. It is curious that these fear-mongers devote so much attention trying to disparage one man who is not even a candidate, holds no public office and who has not even set foot on Kano’s soil during this election. These politicians are so shameless that they must demonize Asiwaju Tinubu to attract support. Theirs is but a blatant attempt to stoke regional and ethnic resentment and division to accomplish their selfish aims. Such tactics are harmful to the democracy Nigeria seeks to enshrine and goes against the progressive tradition that describes Kano’s politics and that has made Kano a beacon of hope and advancement in our nation.

“It is expected that a party leader of Asiwaju Tinubu’s standing will encourage his party’s candidates. PDP’s attempt to make something nefarious of this normal pattern is disingenuous. If they truly believed what they were saying they would discourage PDP members from other states from visiting Kano or offering any form of support. Of course, they do no such thing. But what is proper for the PDP to do, they say it is a dangerous affront for the APC’s Tinubu to do. We believe their attack against Tinubu is not so much that they fear what he might do but that they fear they lack the support of the people. Thus, they try to portray Tinubu as an interloper as the best way to gain support.

“Asiwaju will not play this game with them. He believes in a free and fair electoral process, a project to which he has devoted the majority of his adult life to achieve. Let this election be decided on the relative merits of the competing candidates. Do not cast Asiwaju Tinubu as some villain in a plot you have contrived in a feeble attempt to cloak your political weaknesses and uncertainties.

“Asiwaju is a committed democrat and advocate of free and fair electoral processes. He will neither support nor work to promote anything that will undermine or weaken the electoral system.  He has been at the forefront of the struggle for electoral reforms, justice and equality over the years. He will never do anything that will detract from these fine ideals for which he has strenuously worked. Any reports to the contrary are just the lies and mongering of those whose love and support for democracy are much less than his.”