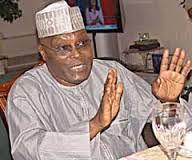 Former Nigeria Vice President, Atiku Abubakar has called for an all party conference aimed at forging a united approach to dealing with Boko Haram and the spate of insecurity in the country, even as he condoled with victims of the twin bomb blasts in Jos, Plateau state as well as the ones in Kano.

Reacting to the latest bomb blast in Jos, which reportedly killed 118 persons and in Kano where five were killed, the former Vice President said in a press statement in Abuja that the persistent terrorist violence against innocent people is embarrassing and intolerable.

He, however, advised Nigerians not to despair and succumb to terrorists’ blackmail, which is aimed at paralyzing the country with fear and hopelessness, and ultimately turning Nigerians against one another.

According to him, terrorism is an act of “deliberate provocation” intended to throw Nigerians at each other’s jugular thereby destroying every positive gains of the country since independence and amalgamation.

Atiku advised Nigerians not to play into the terrorists’ hands by letting themselves provoked into fighting each other or one another.

The former Vice President also called on politicians to be united in condemning terrorist violence against innocent people, adding that terrorists enjoy dividing public opinion in order to justify their atrocities.

The former Vice President advised Nigerians to be more security conscious by reporting suspicious activities or suspiciously parked and abandoned vehicles at crowded public places even as he enjoined the relevant agencies to put in place machinery  for evacuating these and other vehicles that may have been abandoned by their owners.