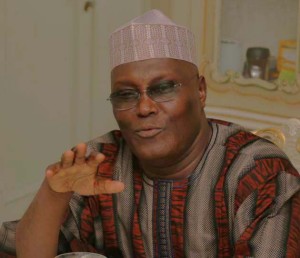 Former Vice President Atiku Abubakar has described the Friday and Saturday Army clampdown on media houses, vendors and seizures of newspapers in transit for delivery nationwide as reckless.
In a press statement issued by his media office in Abuja on Saturday, the former Vice President said: “since the military is not above the law in any democratic society, they should not be the law onto themselves and recklessly infringe on the rights of citizens.”
Atiku is actually worried at what he called “the humiliating treatment metted on media houses and vendors in the course of conducting their legitimate businesses nationwide by the military personnel.”
He reminded them that Nigeria is a democratic nation where freedom of the press is not negotiable and that such freedom is the vital component of democratic government.
According to him, there are various avenues of dealing with situation where newspapers are suspected to be engaged in any illegal activities that breach national security.
“Such avenues can be explored without brazenly violating the rights of citizens.”
Atiku, who his a chieftain of the opposition All Progressives Congress (APC) educated the media attackers on the fact that thousands of Journalists, drivers, distributors, vendors and other supporting staff make a living from the newspaper industry.
He asked the rampaging military personnel not stop those who depend on media work from earning a legitimate earning.
He said that the willful violations of citizens’ rights by military and other security personnel breach the tenets of democratic system, even as he warned that by attacking the press, and arresting journalists, the country may inadvertently be slowing edging back to the dark days of military dictatorship, which took a lot of sacrifices by many including the Press to end.
While condemning the excesses of the military, Atiku however advised media organizations to also demonstrate the highest degree of responsibility by ensuring that what they publish don’t endanger national security.
“In the face of the grim security challenges currently bedeviling Nigeria, I wish to caution Journalists and media practitioners against abuses.”
According to Atiku, the war on terror needs citizens’ and press’ cooperation, which may be hampered by the harassment of the press.
“The military and other security personnel should work harmoniously together in times of national crises. Security require sacrifices and understanding from all Nigerians, and the Press are no exception.
“Our media men and women should at every turn, weigh the implications of everything they intend to publish, especially sensitive stories that could undermine national security.”