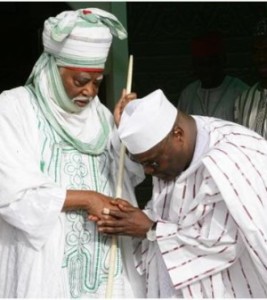 Former Vice President Atiku Abubakar has described the Emir of Kano, late Alhaji Ado Bayero, who died in the early hours of today in Kano as a noble crusader of unity, tolerance and peaceful co-existence, even as Governor Emmanuel Uduaghan of Delta state said that the late Emir stood against religious extremism at great risk to his life.
In a personal tribute today, Atiku Abubakar said that the death of Ado Bayero has robbed the nation of a noble crusader of unity, tolerance and peaceful co-existence, adding that he was not only loyal to his people in his immediate domain, but to Nigeria and humanity at large.
According to Atiku, late Ado Bayero was a pious, humble, upright and honest man whose integrity was unparalleled.
The former Vice President recalled that promoting unity and tolerance was one of Ado Bayero’s greatest and unforgettable legacies, adding that the Emir who celebrated his 50
th Anniversary on the throne in June last year, was a rare leader of enviable and vast wisdom.
He recalled the significant contributions of Ado Bayero to sustaining the unity of Nigeria during the January 15, 1966 political crisis, a role that earned him the respect of the late Dim Chukuemeka Odumegu Ojukwu.
Atiku said the respect Ojukwu had for Ado Bayero, a quintessential bridge-builder, was a significant message about the role Bayero played to hold back Nigeria from the brink of disaster.
Apart from Ado Bayero’s commitment to unity, Atiku Abubakar praised the late monarch’s amazing ability to rule over a vast, complex, heterogeneous, and cosmopolitan state like Kano without losing his sanity, a quality he said was rare among average leaders.
The former Vice President extolled the late Ado Bayero’s integrity and his remarkable character, adding that the late Emir had always associated himself with the progress and development of his people.
The former Vice President condoled with the family, the people and the government of Kano State over the death of Emir Ado Bayero
He described the late Emir as his father, saying that his relationship with the late Emir was of a father and his favourite son spanning over three decades.
Atiku said that he knew that death was coming (like it would for every mortal), but not in agony and humiliation because he (Ado Bayero) did not deserve it.
In his tribute, Governor Uduaghan describing the late Emir as an epitome of peace and national unity, saying that the bold sacrifices and courage exhibited by the late monarch to maintain relative peace in Kano even in the face of threats by insurgents and at great risk to his life.
“Even at great risk to his life and threat by insurgents, the late Royal Majesty stood defiantly against religious extremism and helped to maintain peace in Kano which is the commercial nerve centre of Northern Nigeria.
“Our revered royal father was not cowed; neither did he retreat when his convoy was shot at. He also intervened where necessary to ensure that peace and the unity of the country was not in any way compromised.”
Uduaghan recalled with nostalgia and fond memories of how the late Emir received him and the entourage from Delta State in the ancient city of Kano in 2007, noting that the encounter and warm reception accorded him would remain indelible in his mind.
“Because of his personal commitment to peace and unity of Nigeria, the late Alhaji Ado Bayero welcomed us to the ancient city of Kano. He related to me like a son and I accepted him more like a father.”
Governor Uduaghan particularly noted the late monarch’s support for President Goodluck Jonathan and efforts to combat the scourge of Boko Haram and other terrorist activities in the country.
“I am sure President Goodluck Jonathan will greatly miss the wise counsel and intervention of the late Emir. He was a pillar of support to the Federal Government as well as other forms of lawful authority in the country.”
Governor Uduaghan expressed condolences to the government and people of Kano State, the Ado Bayero family, President Jonathan and Nigerians at large and prayed God to grant all the fortitude to bear the loss. [myad]