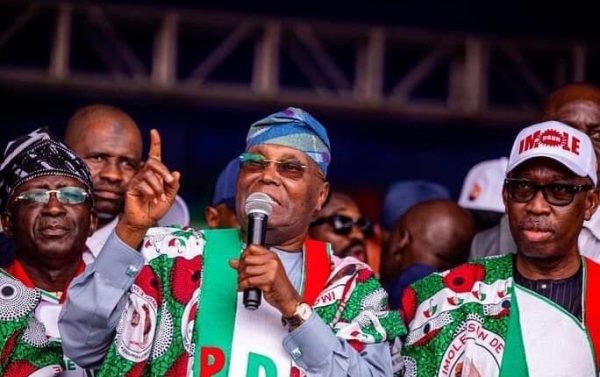 The Atiku Abubakar presidential campaign rally, under the umbrella of the Peoples Democratic Party (PDP) was attacked today, November 9, in Maiduguri, the Borno State capital.

Information reaching us said that the rally, the first to be held in the North East region, was attended by a large crowd and many notable leaders of the PDP.

A statement by the Media Adviser to Atiku, Paul Ibe, alleged that the attackers were wielding the flag of the All Progressives Congress (APC), adding that they destroyed the convoy of vehicles conveying dignitaries to the venue.

“It is rather unfortunate that the APC in Borno State mobilized some of its members to attack the convoy carrying dignitaries who had earlier paid a courtesy visit at the Shehu of Borno palace to the venue of the rally.

“While it is well understood that such barbaric behaviour is typical of the APC, it must be noted that, this time around, it is specifically the last kick of a dying horse.

“The APC, apparently overwhelmed by the large turn of supporters to greet our presidential candidate, resorted to anti-democratic actions to scare the crowd away from the rally.

“It is a similar pattern to what happened during our rally in Kaduna State and it is important to call the attention of all stakeholders in peaceful elections in Nigeria to the dangerous actions being undertaken by the APC to disrupt our rallies, especially in the North,” Ibe said.

Paul Ibe said that Atiku, at the rally, said that if elected president in the election next year, he will ensure that the problem of insecurity is properly addressed, as well as bringing activities at the Lake Chad Basin back to life and continue with the exploration of crude oil in Borno State.

“There are three major issues that are important to everyone in Borno State. The most important is that we must return this state to the true meaning of its title as the ‘Home of Peace’. Therefore, my major agenda as far as Borno is concerned is to deal decisively with insecurity and return peace to this state and everywhere else.

“Thirdly, given the enormity of security challenges, the business of crude oil exploration in this state has been put on hold. I will activate the necessary machinery that will ensure that crude oil fields in Borno State are explored, which will in turn make this state more economically viable.”