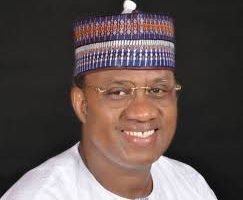 The chairman, Senate Committee on Petroleum (Downstream), Kabiru Marafa, has described the decision of the presidential candidate of the Peoples Democratic Party (PDP), Atiku Abubakar, to reject the result of the Saturday’s, February 23 Presidential election as part of human nature.

Speaking to news men today, Friday, at the Presidential Villa, Abuja, Senator Marafa, from Zamfara State said: “it is an inherent human behavior to always reject failure, so there is nothing new about the opposition’s rejection of President Muhammadu Buhari’s victory.

“I don’t think there is anything to worry about. If you ask me I will tell you that I am not even pleased with the votes that came from my state because I believe we could have done much more.

“We have 1.4 million registered voters and we recorded only about 650,000 votes, so what is the big deal about it?

On the governorship election coming up on March 9, the Senator said that the most important thing now is that Nigeria had finished with the presidential election “which a lot of people are united on the candidacy of President Muhammadu Buhari.”

According to him, when it comes to the governorship election, there are a lot of disparities across the states which the President himself has reckoned by actions.

“So I will urge people to vote for people they trust that can protect their lives and properties; people that will bring about prosperity to them.

“People should be allowed to choose.”