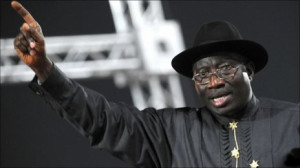 President Goodluck Jonathan has made it clear that leaders and members of Boko Haram have shown that they are only hiding under Islamic religion to cause mayhem in the country.
The President, who reacted angrily to the Sunday attacks, by Boko Haram on five different churches in Borno state noted that Sunday’s attacks on churches and other similar atrocities by Boko Haram are conclusive proof, “if any is still needed, that its leaders and members are thoroughly misguided persons who are only using religion as a cover for their reprehensible crimes against their countrymen and women.”
Jonathan shared the view of the most learned Islamic leaders and scholars that no true Muslim will resort to the mindless killing of innocent people at any time, especially not during the holy month of Ramadan, to redress any perceived grievance.
He vehemently deplored the renewed targeting by Boko Haram of adherents of a particular religion and urges all lovers of peace and unity to wholly condemn the resurgence of efforts by agents of global terrorism to disunite and destabilize Nigeria by callously instigating violence among religious groups in the country.
The President who said that he received attacks by Boko Haram on churches in  villages near Chibok, Borno State with dismay and consternation, called on all Nigerians, irrespective of their religious beliefs, to resist this new attempt to undermine the nation’s firm and collective resolve to unite in full support of its armed forces and security agencies against the vicious perpetrators of brutal attacks on innocent citizens.
The statement from his special adviser on media and publicity, Dr. Reuben Abati, quoted the President as assuring Nigerians once again that the Federal Government and national security agencies will continue to intensify ongoing efforts to end Boko Haram’s senseless attacks until the terrorists are routed and totally defeated.

Jonathan He commiserates with the families and churches that lost loved ones, members and places of worship during Sunday’s attacks.