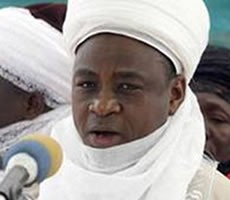 Sultan of Sokoto, Alhaji Muhammad Sa’ad Abubakar III has made it clear that the Boko Haram insurgency and other form of insecurity in the country are just part of the struggle by politicians to gain upper hands against one another in the 2015 elections.

According to him, politicians are behind the myriad of problems ravaging the country.

“Politicians are the main problem of this country. The whole issue of insecurity problem in this country is geared towards 2015 election and nothing more. If there is no election in 2015 and they said till 2030, everything will cool down.

“You see, everybody is trying to take his own position and put himself at a vantage point to gain an extra mile ahead of 2015. The whole thing is all about politics. That is why you see killings but what is paining us is that innocent people are being killed everyday, especially people that don’t even know what is politics.

“We are shedding too much blood of innocent Nigerians and God will not be pleased with us when we keep on shedding innocent blood because their cries mean a lot.”

Sultan Abubakar advised Nigerians to put aside their religion and ethnicity and come together to tackle the myriad of problems bedeviling the country, saying that those who are perpetrating the killings live among the people and as such, there is the need for concerted efforts by all and sundry in order to bring an end to the insurgency.

“The best thing is let us identify these problems, we need to just come together, let us leave religion and ethnicity out of this issue. Let us be sincere and trust ourselves by coming together to solve our problems.

“There are some insurgents killing our people how do we stop them? let us find a way to stop them. These people doing this are not spirits but human beings. So, let us work together to solve our problems.”

The Sultan stressed the need for the Federal Government to dialogue with the Boko Haram insurgents with a view to securing the freedom of over 200 school girls abducted in Chibok, Borno state. [myad]