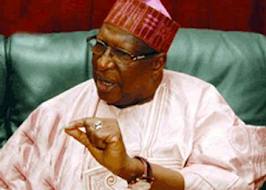 Former national Chairman of Peoples Democratic Party (PDP), Alhaji Bamanga Tukur has made it clear that the Boko Haram insurgency can only come to an end through dialogue even as he asked the Federal Government to engage the sect in such dialogue.

Tukur who spoke in an interview with newsmen in Abuja today said that even the World War crisis was brought to an end through dialogue.

“Dialogue is the answer; let us make it faster to save the lives of our people. We must do all we can to ensure that our nation is safe. Wars that were fought in the past ended up in dialogue, insurgencies one way or the other must end up in dialogue.”

Tukur, who is also the Chairman of the Board of Nigerian Railway Corporation (NCR), advised the Federal Government not to rule out dialogue even as it continued its offensive against the insurgents in the country.

The ex PDP chairman who was also recently made Ambassador-At- Large and honoured with Zik award, called for the strengthening of the nation’s defence system even as he advised Nigerians to remain alert and report suspicious movements to security agencies.

Tukur, who is also the Chairman of the African Business Roundtable, called on the Federal Government to intensify its collaboration with neighbouring countries in order to boost its capacity to win the war against terror.

He prayed to God to touch the hearts of the insurgents in order to stop their nefarious activities, even as he cautioned politicians against overheating the polity ahead of the 2015 general elections.

He said that elections should not be seen as a do-or-die affair, adding that the electorates should be allowed to make their own choice.

Tukur warned against the imposition of candidates by the various political parties, adding that ”election not selection and consensus not imposition should be emphasised always”.

He urged political parties to work towards ensuring peaceful elections in 2015 and beyond, adding that the 2015 election would not  be the first nor the last as erroneously being peddled in some quarters.

He advised politicians in the country to learn to improve on the quality of the polity, adding that opposition in every democracy was normal, but must be constructive and not confrontational.

Tukur has condoled with the media for the death of a journalist in the June 25 bomb blast at Emab plaza in Abuja.

He said that Journalism is a challenging profession that required the practitioners to file reports even in the most dangerous situations. [myad]