Home NEWS POLITICS Buhari Angry With Jonathan’s Ministers, Others For Not Co-operating With His Transition... 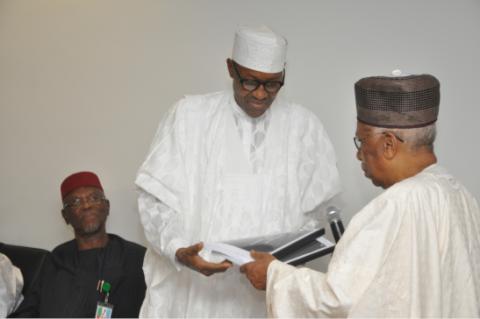 President-elect, Muhammadu Buhari, has expressed disappointment with ministers and other government leaders under the current Nigerian President, Dr. Goodluck Jonathan for refusing to cooperate with his transition committee to brief it on their stewardship.
Buhari said however: “since the bureaucrats who write the reports will be at hand after the departure of the politicians, whatever is there will eventually be known.”
This is even as he requested the Joda-led transition committee to be ready to resume work the moment the outgoing government’s handover notes are received.
The President-elect spoke today when he received the interim report of the Transition Committee, set up to assist the newly-elected President to transit smoothly to the Presidency. The committee was led by Alhaji Ahmed Joda.
The chairman had informed Buhari that the committee received tremendous cooperation from members of the organized private sector (OPS), Nigeria’s international development partners as well as stakeholders from across the country nut that the report does not have any input from the out-going administration.
Alhaji Joda said his committee worked hard through four sub- committees to arrive at the interim report and was optimistic that the final report of the committee would include the input of the present administration, provided it is made available.
The interim report dealt with issues of good governance namely the executive, legislature and judiciary, finance and economy as well as core sectors like agriculture, oil and gas and solid minerals.
The report also looked at Infrastructure and power and national security as well as education, health and social welfare which featured in the manifesto of the party, the All Progressives Congress (APC).
The President-elect, thanked the committee for doing a thorough job and presenting an interim report within the time allocated to it.
Present at the event were APC National Chairman, Chief John Odigie-Oyegun, Chief Bisi Akande, APC national leader, Asiwaju Bola Tinubu and Governor Rotimi Amaechi of Rivers.
Meanwhile, Buhari, today, received the President of Niger Republic, Mahamadou Issoufou who paid him a solidarity and congratulatory visit.
In a statement by Mallam Garba Shehu, Director of Media and Publicity of the Media Team of the President-elect, the Niger leader said he brought the felicitations and good wishes of the people of his country to the President-elect as well as out-going Nigerian leader, President Goodluck Jonathan for the free and fair election that brought a peaceful change of leadership.
The Niger leader said that the free and peaceful elections in Nigeria would impact positively on the development of democracy in Africa.
In his response, the President-elect thanked the Niger leader for his interest and good wishes for Nigeria, adding that Niger has always been a good neighbour to Nigeria.
Buhari went down memory lane to say that there is a lot in common between Nigeria, Niger, Cameroun, Benin Republic and Chad in terms of overlapping ethnic groups, language and culture.
He said that the two countries as well as all other neighbours would continue to cooperate for their common good and wished President Issoufou and the people of Niger well.

See also:  It Is Rubbish To Suggest I Will Step Down For Tinubu Or Form Alliance - Kwankawaso