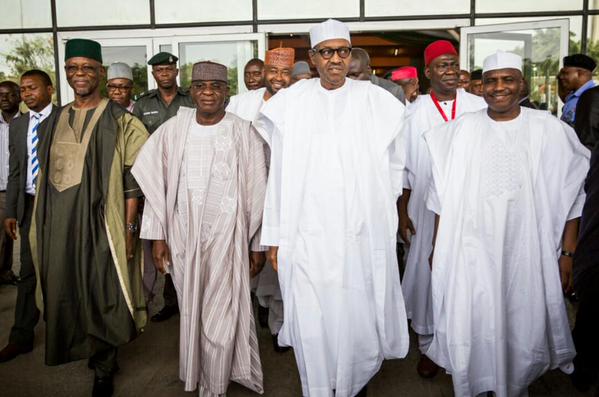 President-elect, General Muhammadu Buhari has listed eight ills that have held down Nigeria for a long time, even as he sought the support of members of the National Assembly to tackle them within the shortest possible time.
Buhari, who addressed the newly elected of the National Assembly today at their induction in Abuja made it clear that these eight development challenges are the mission of his presidency, adding: “I need the support of the Members of National Assembly on the battle front. I need your support in many respects.”
The induction was organized by the National Institute for Legislative Studies
General Buhari named what he called general insecurity and insurgency as the first ill, that has caused extreme human hardship and destruction of lives, livelihoods that may take Nigeria over a decade to rebuild across most of North Eastern Nigeria and some parts of North western Nigeria.
The second one, he said, is the devastation and environmental degradation in the Niger Delta area which he said must be attended to.
The third, according to the President-elect, is the decline in revenues due to fall in oil prices which he said, posed a threat to Government’s capacity to deliver on reconstruction of devastated areas and the new government development agenda.
Others, he said, are endemic corruption that has crippled human and infrastructure development for decades, unacceptably poor provision of power supply that has had a crippling effect on development of small businesses and indeed the wider economy. General Buhari noted that de-industrialization for the past three decades has led to the closure of many industries and migration of many to other African countries.
“Unacceptably high levels of unemployment and especially Youth Unemployment reaching over 40%.
“High cost of governance that has been crowding out capital and human development.
“Erosion of public social services such as infrastructure, health and education.
“Lack of development in the agricultural and solid mineral sectors.”
General Buhari said that appropriate policies needed to be put in place and that such policies might have to be translated into laws, adding that the oversight functions of the legislature is critical in ensuring that policies are implemented effectively and transparently.
“Therefore, my mission to bring integrity into governance would better succeed if complemented with a strong culture of transparent oversight.”
He stressed the need for the executive and the legislature to collaborate on the budget process and restructuring of the public sector so as to collectively tackle the menace of high recurrent cost at the expense of capital and human development.
He also stressed the urgent need for the two to contain the high state of insecurity, adding: “all of you are representing various communities. We need to work together to address the problem from both its roots and manifestations. The strongest mitigating forces at this point are to redress the power sector deficits, encourage investments that are job creating and focus on human development and reconstruction. We also need to deploy efforts in conflict resolution and peace building in all our communities.
“Together, we can make this nation great and as a role model in Africa and other emerging economies and democracies.”
The President-elect reminded the lawmakers that they are standing on the threshold of history saying that for the first time in the nation’s post independence history, power is going to be transferred from an incumbent ruling party to an opposition party.
“This is in spite of predictions of calamitous outcomes. Nigerians have indeed proven once again that they are a united people and stand resolute to protect its growing democracy.
“I wish to specifically acknowledge and laud the maturity exhibited by the political class, the professionalism of our security agencies, the competence and resilience of INEC, but above all the doggedness of Nigerians and their commitment to ensuring that their wishes are represented and respected.
“I dare say, it is equally a victory for all political parties and their leaderships for according due respect to the electoral process and accepting the results in most cases. I wish to specifically acknowledge the role played by the President, H.E Goodluck Ebele Jonathan for accepting the results of the election before final announcement was made.” [myad]