Home NEWS POLITICS Buhari Is To Nigeria What Mandela Was To South Africa And Reagan... 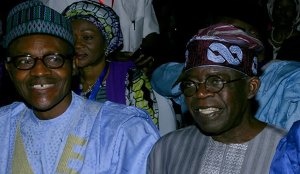 Former governor of Lagos state, Asiwaju Bola Ahmed Tinubu has said that the Presidential candidate of All Progressives Congress (APC), General Muhammadu Bhari has emerged as a man on a rescue mission the same way late Nelson Mandela did to South Africa and Ronald Reagan did to America at slightly over 70 years each.
Tinubu, who spoke today at the APC Presidential rally in Lagos said: “I (had) prayed that Nigeria would get better and we would not need a man like him (Buhari). But today, we are in a great crisis; we face a lot of challenges. When South Africa was in a great dilemma and was about to disintegrate, they called Nelson Mandela of 74 years old. He used his wisdom to save his country.
“When the United States was in economic depression, they called 73-year-old Ronald Reagan because he was frugal and incorruptible.
“When America was faced with depression and war, they called a retired General, Dwight Eisenhower, to rescue the country and the country was returned on a path of success.
“When France was faced with war and economic depression, they called a retired General, Charles De Gaul, to rescue the country.”
Tinubu, who is one of the top leaders of APC said that Nigeria has come to a dangerous socio-economic morass so much that Buhari’s certificate or no certificate would not be enough to now qualify him from ruling the country.
“So what do we need now?  Buhari. This is the time for us. General Buhari, whether you are qualified or not qualified, we are calling you to come and rescue us in Nigeria,” he said.
Tinubu said that because of his belief that General Buhari could save this country from the collapse, he had to sacrifice his presidential ambition for him, stressing that Nigeria is facing an economic crisis and an internal war and needed a person with Buhari’s experience because of the
General’s reputation of anti-corruption and military warfare.
“People define patriotism as putting the country first but this is what the ‘Poverty Development Party’ refuses to understand. We chose Buhari not because Bola Tinubu is not interested in the Presidency. I am capable, competent, qualified, younger and richer but there comes a time that people must make sacrifices for their nation.”
Governor Babatunde Fashola of Lagos said at the rally that President Goodluck Jonathan had done nothing for the people of the state despite the fact that the President got over 1.2 million votes from the state in 2011.
According to him, every project that the Federal Government was supposed to have assisted Lagos in executing had been frustrated by the Jonathan administration.
He, therefore, asked the people of the state to vote for the APC at all levels.
General Buhari described the failure of the PDP-led Federal Government as unprecedented in the history of Nigeria, adding: “we all know what we have gone through in the past 16 years under the PDP. The APC has identified three core problems that must be tackled immediately. First is insecurity, two is the destruction of the economy and three is corruption.
“But whatever we have to do, we will have to secure Nigeria first. What is happening in the North-East where hundreds of people are being killed is unacceptable. We know that the Nigeria Police and the Nigerian Army are capable of bringing peace and stability into the country but they just need good leadership.” [myad]