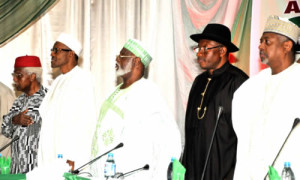 As the abduction of the over 200 female students of the Government Girls Secondary School, Chibok in Borno state by members of Boko Haram entered the third month running, President Goodluck Jonathan, last night, rallied former heads of state for maximum support for the task of retrieving the girls.The former Nigerian leaders who met at the Presidential Villa, Abuja, comprised General Yakubu Gowon, General Muhammadu Buhari, General Abdulsalami Abubakar, Chief Ernest Shonekan as well as the Borno state governor, Alhaji Shettima. General Ibrahim Babangida sent apology as he stayed back in Minna to mourn the death of a senator representing his senatorial district.Detail of the meeting was made known to State House Correspondents by the special Adviser to the president Dr. Reuben Abati.He said that the leaders expressed their commitment to doing every thing they could to support the President to find solution to the issue of the abducted Chibok girls as well as the general challenge of insurgency in the country.The meeting which lasted for about an hour was held over dinner.

See also:  2023: Those Who Left APGA Will Be Disappointed – Anambra Gov, Soludo