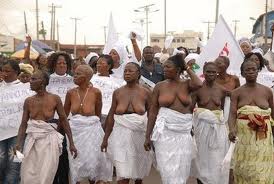 Members of Women Arise, a civil society group, have threatened to go half-naked in Chibok, Borno State, if the abducted schoolgirls are not rescued within the next two weeks, even as they begin protest march in Lagos today.

The President of the group, Dr. Joe Odumakin, who led the protest in Lagos State today said that the protest would be carried out in different states and end in Chibok and Sambisa forest if the girls are not rescued in two weeks.

According to Odumakin, the protest would continue in Enugu State tomorrow and move on to other places such as Kaduna, Lokoja, and Jigawa states.

She said that it is unfortunate that there is no information of the whereabouts of the girls almost a month after the girls were abducted, adding: “It’s a nationwide protest. We are dressed in white, because white signifies purity; most of those girls were virgins. There is a lot government need to do. Look at our borders that are porous. What are we doing about it?

“We are going round all the states. We will be in Enugu tomorrow. We will be in Lokoja, Kaduna, Onitsha, and Akure, and at the end of 14 days, God forbid if they don’t get these girls back, we will go to Chibok half-naked and we will enter the bush to look for them.”

The protesters marched from the premises of the Lagos Television in Agidingbi to the governor’s office in Alausa carrying placards with various inscriptions including ‘Shekau: Find goods to sell, not our girls’, ‘Have we lost our humanity?’ and ‘Hunt down the defilers of innocent girls’.

In a letter to President Goodluck Jonathan submitted to Governor Babatunde Fashola, the group demanded that the girls should be rehabilitated when they return and compensation should paid to their parents for the trauma they have suffered. The group said government should recognise the girls as heroes of the war against terrorism.

It also demanded that government should ensure that the girls take the West African Senior School Certificate Examination, which were said to be ongoing when they were abducted, and that scholarship should be offered them up to university level.

Fashola, who received the protesters, said he would transmit the letter to the President immediately and asked them to be cautious on their demand for the information on the rescue operation.

“I understand your demand for information. This is usually the case when crimes like this are committed. Regrettably, I do not have any information to share with you. But I would also like you to know that when search and rescue operations are being undertaken, especially with people who have shown mindless capacity and disregard human life, there is safety in managing information closely.

“Many nations have turn to greatness when they faced situations like this and developed a sense of unity where religion and ethnicity do not matter anymore. Chibok may be a defining moment that finally unites us and eliminates all our fault lines as a people.”